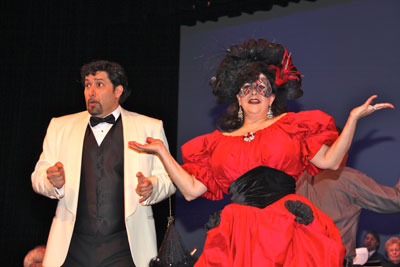 The production was yet another milestone in the Santa Clara-based opera company’s record of breathing fresh life into repertory staples. The minimal production allowed performances to soar, giving listeners an opportunity to see – not just hear – MCO’s outstanding orchestra. Conductor Michael Taylor, as always, kept the show moving along briskly.

“The music paints the scenery,” observes MCO veteran Diane Squires (Adele). “As a performer it’s your job to create the scene.”

Minimal sets can be an advantage, she says. “Michael [Taylor] let the performers bring out the characters. That allows you, the performer, to make the character truly alive – not simply what a stage director is telling you to do.” This is “especially true,” she adds when performers have close working relationships, as MCO’s do.

Die Fledermaus (The Bat) tells of the revenge taken by Dr. Falke on Gabriel von Eisenstein for abandoning him after a night of drunken revelry to wake in a public square dressed as a bat.

Act one sets up the players for Falke’s plot.

Eisenstein, about to serve a week’s sentence for assaulting a policeman while he was drunk, is saying goodbye to his wife, Rosalinda. Falke arrives and privately persuades Eisenstein to take a detour to jail that evening via a revel held by the notoriously decadent Prince Orlofsky – who’s in on the joke. Falke then separately lures Rosalinda to attend the ball in disguise to spy on her husband, and her maid, Adele, to go in hopes of finding a rich backer for a hoped-for theater career.

Identity mix-up compounds when the prison governor interrupts a tête-à-tête between Rosalinda and her old lover Alfred. Rosalinda goes along with the governor’s assumption that the man she is kissing so fondly must be her husband. But to keep up the pretence, Alfred has to go off and serve Eisenstein’s sentence.

The second act is all Orlofsky’s party, where the champagne flows and Falke’s set-up plays out. “Marquis Renard” – aka Eisenstein – meets an actress with a remarkable resemblance to his wife’s maid – Adele, wearing one of his wife’s ball dresses. Moving on, he flirts shamelessly with a mysterious masked Hungarian countess – Rosalinda. The Countess tricks Eisenstein out of his pocket watch, for future use as evidence of his cheating ways.

All is revealed the next morning at the jail where Act three sees confusions explained, sinners forgiven, and Falke’s joke concludes happily. Rosalinda trades the watch for Alfred’s presence at Eisenstein’s dinner table, Adele acquires a sugar daddy in the prison governor, and Eisenstein and Rosalinda wisely decide that “least said, soonest mended,” blaming – what else – the champagne.

The show featured many MCO favorites. Soprano Sharon Maxell-Yamamoto balanced Rosalinda perfectly between shrewdness and naiveté. Maxwell-Yanamoto has distinguished herself in many roles with MCO, including La Boheme’s Mimi and Madame Butterfly’s Cio Cio San, and Saturday night’s performance was no exception.

Tenor Pedro Rodelas created an Eisenstein whose clueless wannabe playboy engages the audience’s sympathy. Mezzo-soprano Kindra Scharich charmed as an insouciant and jaded Orlofsky, up for anything from Plato’s discourses to Plato’s Retreat. And tenor Michael Desnoyers brought just the right amount of conceit to the role of Alfred.

In not prolonging the jailer Frosch’s comic role and by omitting an intermission between the party and jail acts, this production maintained its dramatic pace and never lost its grip on the audience. Baritone Robert Snedegar’s Frosch lost nothing for skipping the stale face-on-the-barroom-floor comedy.

Effervescent Diane Squires’ Adele was a joy – which is no surprise as the first opera aria the redheaded coloratura learned was Adele’s famous Laughing Song from Fledermaus’ second act.

All in all, it was a performance to remind Santa Clarans of their exceptional good fortune in having such an accomplished opera company right here at home.

Carolyn Schuk can be reached at cschuk@earthlink.net

Making Sense of Demons and Gods