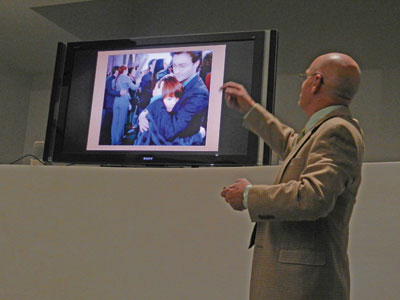 “Tonight we’re going to talk about symbols of demons and gods,” said Triton Museum of Art Chief Curator Preston Metcalf as he opened the seventh lecture in the Hidden Symbols of Art Series on February 23. “Now this is, to me, kind of an interesting topic because metaphorically, symbolically there is no distinction between the two. Now, we’re talking about the elemental ideals – the deeper messages of the symbols, not the cultural meaning. Every culture develops their own demons.”

Metcalf explained how demons are a different manifestation of the divine and how most of the gods in Buddhism and Hinduism were demons at one time or another. He then showed an image of a sculpture, Shiva Maheshvara, The Great Lord.

“You’ll notice it has three faces. The face facing outward is ambiguous in the sense that you don’t know if it’s male or female. It looks peaceful, it doesn’t have a frightening expression. Now the face facing leftward, to this figure’s left, is female and it’s peaceful looking. The face facing rightward is male and…he is fearsome looking,” said Metcalf. “That is all the same being. Those are not three different characters…Now here’s the key. The reason it has everything is because their gods are not some beings out there. All of these are symbols…it represents you…They’re you and don’t we all have light and dark sides?”

In Eastern religions, demons are gods are one. In Christianity, Islam and Judaism, however, demons are evil. Six weeks ago, during the first week’s lecture on feminine symbols, Metcalf discussed how symbols like serpents and horns were not inherently bad, but that our cultural symbol of these items demonized them. But, when did this happen?

“Demon, the word itself, comes from the Greek word daimon, which means the moon goddess,” said Metcalf. “It doesn’t literally mean that, but that is what it represented…but then it came to represent all deities…Once Christianity came into play and got the upper hand in the social structures, daimon became demon and all of those ancient gods and goddesses became demons.”

Metcalf talked about how the gods and goddesses became demons and how the symbols we associare with evil, are not actually evil. Then he switched gears.

“What I find more fascinating [than cultural symbols] is how we create demons and how we create gods because we do indeed have an entire symbology that is tied to the creation of a god,” said Metcalf. “We touched on it a bit with the hero’s journey…Sometimes the world savior is indeed a figure that is cast as being the entire world’s savior. Now this is where it gets confusing. Sometimes the world’s savior is a cultural figure but that’s only because those cultures thought that their culture was the entire world.”

There are 21 common characteristics of a world savior and nearly every single savior follows the plot points. Metcalf pointed out how the savior’s journey might not be in the same order he presented or how a savior might only hit the majority of points, but the general idea is that the world savior story will follow the same basic outline. Think of the story of Jesus, and, in more modern times, the story of Harry Potter. Metcalf went through Potter’s story point by point, for all 21 points and proved how “the boy who lived” was more than just a lucky kid; he was written to save the world.

“I like to do that because these symbols are with us,” said Metcalf. “I just pointed out Harry Potter. I mentioned Star Wars. The Matrix films is the Christ story – point for point for 21 points and I can go through numerous pop culture stores that have this same imagery…I want you to watch for [these symbols]. I want you to experience them…I’ve had half a dozen of you come up to me and say, ‘where can I learn more?’ There is no specific art history book. Read Carl Jung. Read Sir James Frazer. Read Joseph Campbell. Read them all. Read everything. Read Huckleberry Finn. Read Harry Potter. Read The Da Vinci Code. Read all of it because these symbols are alive, most of our culture just doesn’t know it. So I want you to have fun with them.”