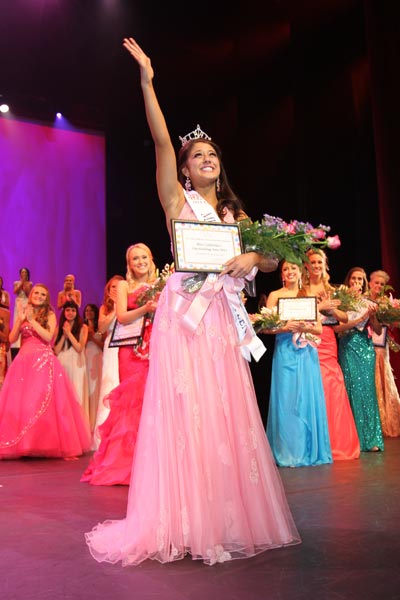 “I’m still in shock, but it’s sinking in,” Carmack says of her win. “The best part about winning is knowing that all my hard work has paid off. I’m so excited to represent the state of California. I’d like to thank all my friends, all my family, the Miss Santa Clara Auxiliary, and the Miss California organization for making this possible.”

For her preliminary on-stage question, Carmack recalls being asked about how California schools could improve student attendance rates.

“I responded that we should promote the benefits of going to school,” Carmack says. She went on to establish a link between good student attendance and the increased chance of admission to a desirable college.

“For my evening gown, I wore a pink Jovani halter dress with big lace flowers and a ton of rhinestones,” Carmack continues. “[Stephanie Quintal] helped me rhinestone the whole dress.”

On August 16-20, Carmack will be in Orlando, FL to participate in Miss America’s Outstanding Teen Competition. Carmack, who will be a high school senior in the fall, has a busy summer ahead of her.

“This summer, I’ll be preparing for Miss America’s Outstanding Teen,” Carmack says. “I also have a job at the Santa Clara Youth Activity Center where I am a camp recreation leader. And I’ll be working with my cheer team at Wilcox High School.”

“In the teen competition, Molly placed in the top 10 [with Jessa],” Quintal says. “[In the Miss California competition], Jansie received the Miss Miracle Maker Award for raising the most money for the Children’s Miracle Network. Felicia did her absolute best and she was the best Felicia we could have asked for.”

“We’re also trying to get Jessa to do more appearances with her platform, which is youth health and fitness, before we leave for Orlando,” Quintal says.

Carmack will be juggling school with the numerous appearances she will be making around California as Miss California’s Outstanding Teen 2011. For example, she has already been booked to appear at a charity event with the San Jose Earthquakes later this year.

“Last year was great,” Carmack recalls fondly of her previous year as Miss Santa Clara’s Outstanding Teen 2010. “I have a feeling that this year might top last year.”

The Miss Santa Clara Auxiliary is hosting a public homecoming and send-off event in Carmack’s honor before she leaves for the Miss America’s Outstanding Teen Competition. The event will be on August 6 at the Santa Clara Elks Lodge on 1680 Martin Avenue. For information about the event time and ticket prices, contact Stephanie Quintal at stephanie_quintal@yahoo.com or (408) 761-2808.

The Leukemia & Lymphoma Society Hosts a Presentation about Light The Night