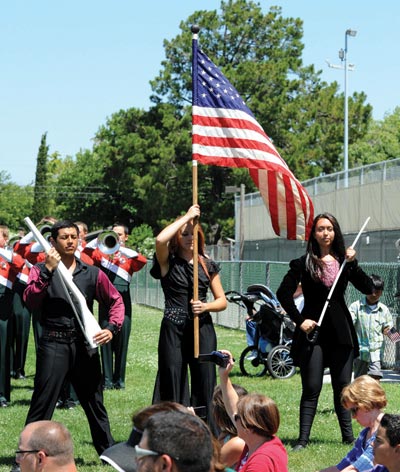 From there, the entertainment came on fast and furious and didn’t stop until the end of the day. There were food booths, games for kids to play, a dunk-tank, the Fire Department’s Safety Trailer and Fire Engine and even the Police Department’s DARE Squad Car.

During the day, dancers from the Santa Clara Parks and Recreation Department and the Sizzling Seniors strutted their moves to impress the crowd. As the day progressed, the Bell Brothers, the Santa Clara Vanguard and Vanguard Cadets, and finally Busta-Groove all enticed the crowds with their skills and musical stylings.

But the day’s activities ended early and more quietly than many of the attendees could remember as the City Council voted not to spend the approximately $75,000 required to put on a fireworks show.

In 2002, the City held a fireworks show to celebrate the sesquicentennial (150th) anniversary celebration of the founding of Santa Clara. Every year since then the 4th of July event at Central Park has concluded with what some people have called, ìone of the largest fireworks shows in the South Bay.î While other cities might dispute that claim, a very unscientific poll found the attendees evenly divided between the sense of loss for the fireworks show and understanding of the economic realities.

ìI’m dealing with unpaid furlough days. It would be pretty incredulous if the City paid for a fireworks show, while telling my co-workers and me that we need to take days off without pay,î said a city worker who wished to remain anonymous.

Several people questioned the cost, not understanding that it’s not just paying for the fireworks show, but paying for staff time, as well as the overtime, to make the show as enjoyable and successful as it has been.

Others expressed dismay that another funding source couldn’t be found. ìWhy don’t the 49ers pay for the fireworks show?î was a common question heard during the day. The reason is that with the City currently in negotiations with the 49ers, it wouldn’t be the correct thing to do as it might not pass the ethics ìsniff test.î

But just as many people said they understand the need to ìtighten one’s belts and cut back on expenses.î Russell S. of Santa Clara stated, ìI was laid off almost two years ago and my wife and I are working three different jobs to make ends meet. If the City is also facing a deficit, then they should cut whatever programs they need. While I enjoy the fireworks show, I also understand the necessity of living within one’s means.î When asked how he and his family felt about this year’s event, sans fireworks show, everyone gave it a big thumbs up. ìIt’s a lot less crowded so it really feels like a small-town picnic. I loved coming and seeing all the people, but this year, there’s room to move around. But I hope the fireworks show comes back in the future.î