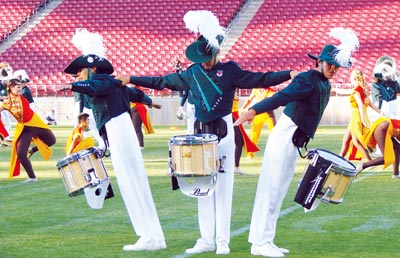 Flags swirled, batons twirled, rifled rifted through the air and the musicians marched in flawless lines and perfect beat to the music they were playing on Saturday, June 25 at the Drum Corps International West competition. The event, which included seven World Class, four Open Class, and one All Age corps from across the nation, was held at Stanford University in Palo Alto.

Santa Clara Vanguard sent both the Vanguard Cadets and Santa Clara Vanguard teams to the event, which put them head-to-head with the likes of The Blue Devils from Concord, Calif., Phantom Regiment from Rockford, Ill., and The Cadets from Allentown, Pa. Nearly 250 performers ranging in age from 16-22 make up The Vanguard’s two corps.

The Vanguard Cadets placed second in the Open Class division, falling 2.35 points shy of Concord, Calif.’s Blue Devils B corps who scored a 69.100 for the victory. The Santa Clara Vanguard landed in fourth place of the World Class division, scoring 73.400 points. The Cadets came in first with 76.950 followed by the Blue Devils with 76.450 and Phantom Regiment with 73.900 points.

These athletes, artists and performers, who rehearse and train up to 12 hours a day and travel over 12,000 miles across the country each season, can next be seen at the Santa Clara city wide picnic where both the World Class and Open Class corps will be performing. The performance will take place on Central Park’s softball field at 2 p.m. and later, the World Class Vanguard will perform at California’s Great America at 5:30 p.m.

Santa Clara Vanguard Drum and Bugle Corps is a nonprofit youth activity group formed in 1967 and has been the only organization to continuously maintain its membership on the Drum Corps International Board of Directors since DCI’s inception in 1972. Additional information on Santa Clara Vanguard, including how to get involved with the organization can be found at www.scvanguard.org

Community
Author Diane AndrewsPosted on June 24, 2022
It was Father’s Day and 96-year-old—on June 29—William (Bill) Reed and his son Patrick Reed reminisced as they walked around the lot behind the...