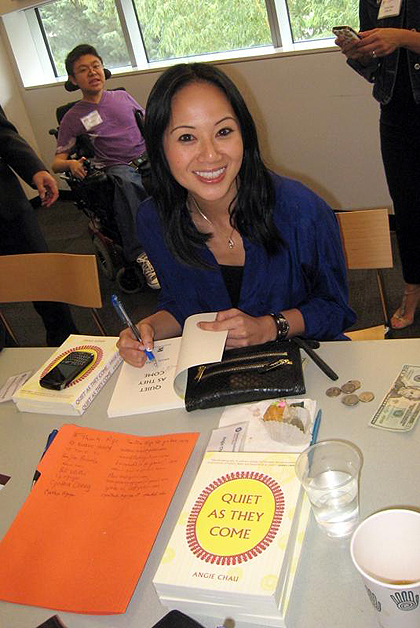 Growing up, Angie Chau was not satisfied with the cinematic images depicting Vietnamese people.

“In the media, the people I saw [depicting the Vietnamese] were girls dancing on poles and people getting tortured in Rambo,” says Chau. “I didn’t see the kinds of people I knew in the media. So I started writing this book.”

Chau, whose work has appeared in the Santa Clara Review and the Indiana Review, recently wrote “Quiet As They Come,” a collection of short stories. To demonstrate the cultural differences between the older Vietnamese generation and Vietnamese American youth, Chau read an enlightening excerpt from her book about a father and daughter playing tug of war over the concept of sleepovers, an American norm that is unheard of in Vietnam.

Chau was one of three featured authors at “Bridging Cultures & Generations: A Conversation on Vietnamese American Literature” at San Jose State University on May 7. The American Leadership Forum of Silicon Valley, which is based in Santa Clara, hosted this event.

When she was a student, Isabelle Pelaud wanted to learn more about her Vietnamese mother but couldn’t find accessible literature about Vietnamese Americans. Today, Pelaud is an associate professor in Asian Americans Studies at San Francisco State University and author of “This Is All I Choose to Tell: History and Hybridity in Vietnamese American Literature.”

“What I do in my book is create a framework for those who want to teach and learn more about Vietnamese American literature,” says Pelaud, another featured author.

In honor of Mother’s Day, Lam read an essay from “Perfume Dreams.” He shared a childhood conversation he had with his traditional Vietnamese mother where she referred to him as an Americanized cowboy.

“A cowboy in Vietnamese estimation is a rebel who, as in the spaghetti Westerns, leaves town, the communal life, to ride alone into the sunset,” Lam reads from his essay.

“One of the hallmarks of our organization is diversity,” says Debbie Ford-Scriba, vice president of network relations at the American Leadership Forum of Silicon Valley. “This event is an opportunity to bring the experiences of the Vietnamese diaspora to the public.”

“We have come of age in terms of sharing our culture and contributing economically to this region,” says Quinn Tran, one of the event organizers.

Vietnamese Americans, such as Lam, Pelaud, and Chau, are also contributing their perspectives as writers. Years ago, when Lam announced to his parents of his dream to be a writer, his father said, “Name a Vietnamese who is making a living as a writer in America.”

“I’d be the first one,” Lam responded.

Lam, Pelaud, and Chau’s publishing successes prove that Vietnamese writers can indeed make it in America.

The Mystery of Edwin Drood