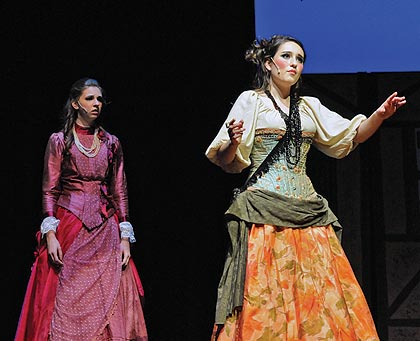 The latest production by the Wilcox Stage Company, The Mystery of Edwin Drood, opened on Thursday, May 5 at the Mission City Center for the Performing Arts. Written by Charles Dickens in 1870, Drood is also Dickens’ last work. Some might characterized the book as one of the best mysteries ever written, but that’s probably because Dickens died while writing it, leaving the ending unfinished.

The opening of Drood even includes an acknowledgement of Dickens’ untimely passing before writing the ending. But the lack of a definitive ending is what gives Drood its unique twist as the audience gets to determine how the show ends each night. With only five different performances, it’s impossible to see all the variations but that’s just one of many reasons why Drood is a must-see performance.

The Wilcox Stage Company chose to use Rupert Holmes’ adaptation of the Dickens’ novel. But instead of just following Dickens’ writing style, Holmes turned Dickens’ work into something much more memorable. Holmes’ version isn’t just the retelling and filling in the missing conclusion of a Dickens’ work. Rather, Holmes makes the show into a play within a play by having the actors play actors who are playing Dickens’ characters. If that sounds confusing, at first, it is. But when it becomes clear what you’re watching, the humor and antics of the show become even funnier.

Edwin Drood disappears early on during the production. Was he killed? Did he go into hiding? But that’s not a spoiler. That’s the mystery of Edwin Drood and that’s where the play takes on its twists and turns. During the show, the audience gets to decide who will be the culprit, the lovers, and the sleuth.

In an article Holmes wrote for the Shaw Festival about The Mystery of Edwin Drood, Holmes states, “I wouldn’t create my own mock-Dickensian ending for Drood. I’d let the audience decide who was the murderer, who was the Detective in Disguise, which pair of lovers had a happy ending, by writing an extra act’s worth of material from which one of hundreds of combinations of endings could be created on the spot. I realized that, within this framework, the traditional Music-Hall Chairman could usher us through the forever-tangled threads left dangling by the great author’s demise – and when we reach that point where Dickens died, the Chairman could be scripted to offer up candidates for Culprit, Sleuth and Lovers, and to host a series of genuine elections in order to create the audience’s own customized conclusion to The Mystery of Edwin Drood.”

Even if things sound confusing reading this review, it really isn’t. Drood offers enough plot twists to keep it fresh and intriguing. Holmes’ idea is definitely an interesting way to put on a good show and the Wilcox Stage Company delivers. There’s still a few chances left to see The Mystery of Edwin Drood. Performances are set for May 13 and 14 at 7pm and May 12 at 3pm.