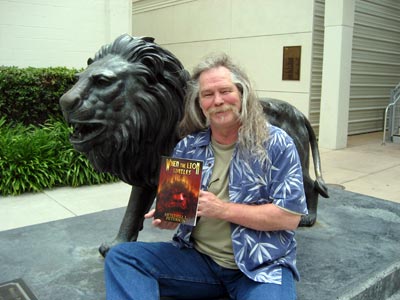 Santa Clara writer Mitchell L. Peterson has a robust frame and a wild, below-the-shoulder mane of silver hair. On first meeting, one is struck by how much he looks like the fierce but smiling lion on the cover of his recently released novel When the Lion Smiles, a thriller set during a damp, bone-chilling winter in Venice, Italy, in the 1990s. It was the perfect season and place for a murder.

“Venice,” says Peterson, “is a beautiful version of Alcatraz—a small confined space where you know everybody, and there are only five ways in and out. If accused of a crime, it’s hard to hide.”

Peterson knows Venice well. His wife, Enrica, is Venetian, and they have visited the city together many times, even living there two years between 1992 and 1994. The idea for When the Lion Smiles came in 1989 during their first trip to Venice, where the winged lion of the book’s title—the symbol of Venice—is displayed everywhere.

The thriller was inspired by a story told to Peterson by a friend whose souvenir shop was just off Saint Mark’s Square, the largest and most important piazza in Venice. At the east end of the piazza is Saint Mark’s Basilica, the grand symbol of Venetian wealth and power.

The plot revolves around Martin Shaw, an American tourist in Venice who is hunted by the Italian Carabinieri for a murder he didn’t commit—and by a psychopath who is the real killer. Shaw is a successful recovering alcoholic who became, instead, a workaholic. He is in deep denial about his addictive personality, and his wife wants a divorce and, maybe worse yet for him, half his assets.

“My stories are all the same—redemption,” says Peterson. “Whatever character I’m writing about, it’s redemption. Someone is actively trying to repair their life or someone whose life needs repair comes to an understanding of self, an epiphany, and is faced with the choice of living a lie or finding a new way to live.”

Roman Catholic Venice is a dramatic contrast to Peterson’s Methodist upbringing in Oregon. Explaining his long interest in writing, including poetry, he says that “my parents insisted that we read, which I still do. I was raised by a thoughtful man, one not afraid to sit and think.”

It wasn’t until 1996 that Peterson found time to write the first draft of his thriller. Two years later, when he submitted the polished manuscript to a publisher, it was turned down. Not knowing where to go or what to do next, he shelved it. Then in December 2010, at the suggestion of Santa Claran Lynn Perry, author of Murder in Gold, Peterson pursued publication with Publish America, and his sleeping lion woke up smiling.

Now retired, Peterson has more time to cultivate the succulents and fruit trees in his garden, pamper his bulldog, Rocco, and, of course, write. He is already plotting two sequels: When the Lion Returns and When the Lion Roars. A collection of his poetry, Tuesday at Five, has also been released by Publish America. Peterson can be found on Facebook.

“If you find searching for redemption interesting in the context of a thriller set in one of the world’s most beautiful cities, then you’ll enjoy When the Lion Smiles,” says Peterson of the 475-page soft cover novel available at www.amazon.com, www.BarnesandNoble.com, www.Borders.com, and www.PublishAmerica.com.

The Leukemia & Lymphoma Society Names Man and Woman of the Year