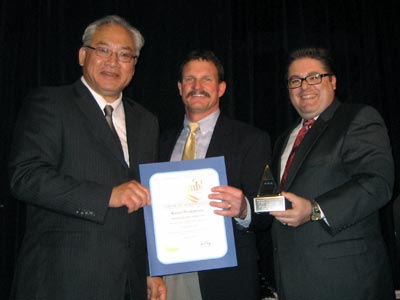 The ballroom was abuzz with energy, optimism and possibility at the Santa Clara Chamber of Commerce’s Pyramid Awards Dinner June 16 at the convention center. Outstanding Chamber members were honored, the 2011/2012 Board of Directors and officers were installed, and the accomplishments of the last year were celebrated, including thanking outgoing Board members for their volunteer service to the Chamber and the community.

Steve Van Dorn, Chamber President and CEO, reported to loud applause that the Santa Clara Convention Center would be adding more than $250,000 in profits to the City’s General Fund for the fiscal year ending in June.

“The Chamber looks out for residents. It is charged with bringing and keeping quality businesses in Santa Clara. The taxes go to the city for services, so we want residents to shop Santa Clara and buy Santa Clara,” says incoming Board Chair Chris Citti of Citti’s Florist.

California Assemblymember Paul Fong, representing District 22, arrived from Sacramento in time to join J.P. Rollet, outgoing Chair of the Board of Directors, and Van Dorn in making the annual Pyramid Awards, which recognize an individual Chamber member, a business member, and an ambassador for their service. Pyramid-shaped trophies symbolizing the honor mirror the roof-top architecture of the convention center, which turns 25 July 1.

Kaiser Permanente Santa Clara Medical Center, a sponsor of many Chamber and community events, received the Pyramid Award for Business Member of the Year.

“We started in 1963 at Kiely,” says Chris Boyd, Kaiser Senior Vice President/Area Manager and 2011/2012 Chamber Board member. “In 2007 we opened the new campus—ranked as one of the most beautiful in the country. Also, there has been technology change, but the people don’t change. We have six thousand compassionate health care people who are well trained and give back to the community.”

Paul Dines, a financial advisor with Edward Jones Investments, was chosen Individual Member of the Year. Though unable to attend the dinner, a video was shown of him earlier receiving his award. Within the Chamber, Dines leads the Power Partners Program.

Dines and Robin Benitez, a business development manager at ESG Consulting, Inc., were named Co-Ambassadors of the Year for their active roles in mentoring new business members of the Chamber.

“These awards are critical to our organization’s success,” says Van Dorn. “Without volunteers such as Paul Dines, Robin Benitez and companies like Kaiser Permanente, Santa Clara would not be as successful a City as it is today.”

Scholarships of $2,000 each were presented to Santa Clara High School graduates Hamera Gerra and Mikias Gizaw. Mayor Jamie Matthews installed the 2011/2012 Chamber Board of Directors and officers, numbering about 20. The Board members are elected by the approximately 550 Chamber members.

“Being strong leaders in community is so important. This is a great Chamber, and you should be very proud,” says keynote speaker Jim Wunderman, President and CEO of the Bay Area Council. Wunderman capped the evening with a presentation on a hoped for bid to bring the 2020 World Expo to Silicon Valley’s Moffett Field

“I look forward to a prosperous year at the Santa Clara Chamber of Commerce,” says 2011/2012 Board Chair Citti, who grew up in Santa Clara. “I was raised here, and it was a village of good people looking out for each other.” Looking around at the 175 good people attending the Pyramid Awards dinner, it appeared that this is still the case.

The Chamber of Commerce (www.santaclarachamber.org or 408-244-8244) is a nonprofit Californian corporation serving the business community. Also, it is contracted by the City to manage and operate the Convention-Visitors Bureau and the Convention Center (www.santaclara.org).

Community
Author Cynthia ChengPosted on August 7, 2013
The evening show on July 26th at the Santa Clara Convention Center got off to a jazzy start. First, alumni of the California State...

Community
Author Erika TownePosted on April 15, 2020
It all started with a small group of people that saw a problem and then went about trying to solve it. “The community, the...
SPONSORED