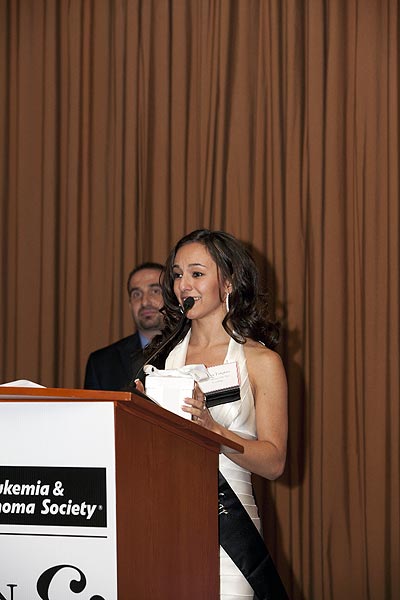 On May 21, about 180 people gathered at the Four Seasons Hotel in East Palo Alto to attend the Grand Finale Gala of the Man & Woman of the Year campaign hosted by the Silicon Valley and Monterey Bay Chapter of The Leukemia & Lymphoma Society. The gala recognized individuals from all over the region who helped raise funds for the non-profit organization, including the organization’s 2011 Man and Woman of the Year, who are Dustin David of Los Gatos and Jansie Tompkins of Santa Clara.

“This was a 10 week fundraising competition,” says Jill Popolizio, senior campaign manager of the Man & Woman of the Year Campaign for The Leukemia & Lymphoma Society. “At the end of the 10 weeks, the man and woman who have raised the most funds are awarded the title of Man of the Year and Woman of the Year. Jansie Tompkins raised over $18,000 and Dustin David raised over $47,000. Winners represent our organization and speak on behalf of our mission.”

The fundraising efforts by all candidates participating in this year’s Man & Woman of the Year Campaign brought in a whopping total of $240,000. This money will go towards cancer research and patience assistance programs. Popolizio commends all the candidates in the Man & Woman of the Year Campaign for their abilities to raise such a large amount of money.

One of hair salon owner Dustin David’s clients nominated David for this year’s Man of the Year campaign. Because one of David’s grandfathers died of leukemia, The Leukemia & Lymphoma Society is a cause close to his heart.

“My friends and I also put together a dark circus party with Asiel Design in San Jose and 210 people attended,” David says. “We auctioned off art work and black diamonds. We raised over $20,000 that night.”

David is excited to win the Man of the Year title and credits community support for his accomplishment. He thanks his donors, many of whom are his salon clients.

“It was amazing how willing people were to help me out,” David says. “They’d give me what I asked for and ask if I needed more.”

Tompkins says she has been involved with cancer research organizations after her dance teacher passed away from cancer in 2005. To raise money for this campaign, Tompkins organized a fundraiser gala and a spaghetti dinner in Santa Clara earlier during the spring. As the current Miss Santa Clara 2011, Tompkins is pleased to win an additional title of Woman of the Year for the local chapter of The Leukemia & Lymphoma Society.

“It’s really amazing,” Tompkins says. “But what’s most impressive is that we all raised $240,000. That is a lot of money, and we all worked towards that goal.”

Visit www.mwoy.org/sj for more information about The Leukemia & Lymphoma Society’s Man & Woman of the Year campaign in the Silicon Valley and Monterey Bay area.

Where Do Babies Come from?