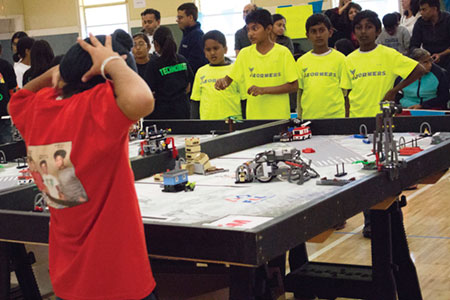 Sixteen middle school teams flooded the gym of St. Lawrence Academy on Nov. 23 to showcase their programming and Lego design skills while presenting a solution to the theme of “Nature’s Fury” at the First Lego League challenge qualifying tournament.

This year, participants came up with innovative ideas that could help save lives during a natural disaster.

Likewise, the PowerBots, a team from Tom Matsumoto Elementary in San Jose, also had earthquakes in mind when they developed the website PB& J world.

“Our project is basically a website but it’s different from other websites,” said Mehar, 11. “On other websites you donate money and don’t know what it’s used for but on our website you can pick what it’s being used for, you can see where it’s going. Also you can become a PowerBot and recruit PowerBots all over the world so that they can also save people from natural disasters and rebuild.” The team’s website (http://anshulrao2012.wix.com/pb-and-j-world) is live and the group is actively recruiting PowerBots worldwide.

Holy Family School in San Jose sent The Lightning Thieves, a group of sixth graders who thought about hurricanes and came up with the H.E.L.P. (Human Emergency Locater Project) bracelet, a device that helps locate people during an emergency.

“A main problem with hurricanes is locating people after them,” said Isaiah, 11. They can be stuck under rubble or seriously injured and they need help. Our solution was to make this bracelet and it has a QR code and you can scan it and it has all of your personal information, which you put in before – like your name, your address – and then you scan it and can put your status and say I’m OK, or I’m injured and I need medical attention.”

“We built a prototype and it is estimated to cost 21 cents each and we believe this could be an efficient, cost-effective solution that could work with any natural disaster such as in the Philippines with Typhoon Haiyan,” added Chris, 11, who also served as the programmer for the team’s robot.

One of the two all-girl teams, the Flying Pandas, chose wildfires as their disaster and developed a “smoke sniffer” for hikers to wear.

“Our solution uses SSWATCCH and that stands for sound, smell, wind speed, air density, temperature chemical, color and humidity and it uses all of these sensors to be sure of a wildfire and guide people to safety,” said Nithya, a sixth grader at San Jose’s Miller Elementary School.

Seven of the teams competing on Saturday qualified for the regional tournament, which will be held early next year. The Brickheads, PowerBots and Lightening Thieves advanced, with the PowerBots winning the award for the team that exemplifies the tournament’s core values, and the Brickheads taking home the judge’s award.

Looking Back - Week of Dec 4