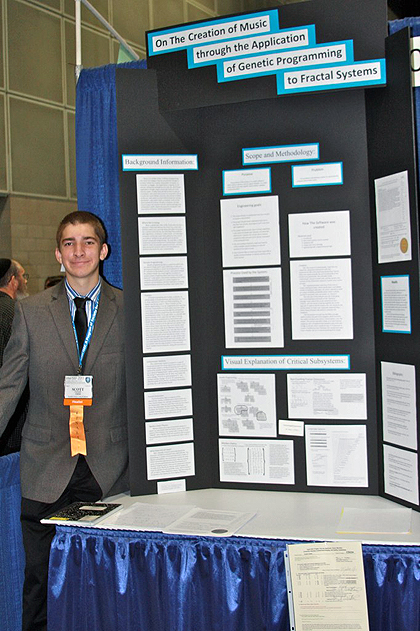 “The most important aspect of learning about science is in understanding how the process works,” says Young, who mentored eight of his students to participate in the Synopsys Silicon Valley Science and Technology Championship in early March. “By performing investigations of their own, students gain a better understanding of the value and the uncertainties inherent in scientific studies.”

“At the science championship, we had 21 awards given to 14 winning students [from all over the district],” says Mary Kay Going, director of curriculum and instruction at the Santa Clara Unified School District. Winners from the Synopsys-sponsored science fair included students from Buchser Middle School, Don Callejon School, Peterson Middle School, and Wilcox High School.

One of the award-winning students was Scott Cesar, a senior at Wilcox High School and a student in Young’s Advanced Science Investigation class.

“My presentation was about the creation of music through genetic programming to fractal systems,” says Cesar. “My program teaches a computer how to compose music based on user input. I like classical music, but my program can be used to compose any kind of music. It provides people without [musical] talent the ability to compose music. It takes small elements that make up music to mix up a song. The program emulates mixing DNA to create a new organism.”

Not only did Cesar win the 1st Award on an individual project in the Computers/Mathematics category and was a finalist for The Synopsys Outreach Foundation’s prize, he also took home the grand prize for Best of Championship. Cesar’s award for winning the grand prize was an all-expenses paid trip to Los Angeles, where he entered his project into the Intel International Science and Engineering Fair from May 7-12.

“This was the first time in the history of Wilcox High School that we sent someone to the international science fair and it was very exciting,” Young says.

“The honor to go to the international competition is the biggest award you can win,” Going says.

Young and Going are also grateful for Intel’s support of scientific investigation in the classroom.

“Intel has been a multi-year science, math and technology sponsor for grants in the school district,” Going says. “They supported funding to put a science investigation course during the school day. This course allows students to work toward science competitions such as the Synopsys fair and those which our students have won entrance to this year, [such as the state and international fairs]. Scott is able to work on his project during the school day as opposed to doing it after school when he would have so many other activities. Intel also supports an investigations club at Santa Clara High School.”

“Students decide what they need to do in each class,” Young says. “They ask me if they need certain resources, but they drive the class. I just give them the deadline. My job is to make sure they stay on task.”

“[Craig Young] gave me a lot of encouragement on how to perform my research and present my project,” Cesar says.