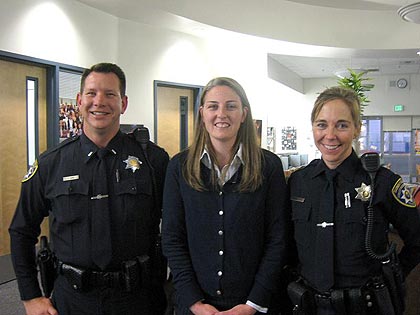 Jill was a pretty cheerleader at a high school in Santa Clara County. She sent a naked picture of herself to a boy who she thought was a friend. The boy passed it around to another boy, and eventually, the picture was posted on the Internet. Embarrassed and ashamed, Jill committed suicide by hanging herself. Unfortunately, this is a true story told by Jill’s parents in a video presented by the Sunnyvale Police Department.

“If any of the boys had just pressed delete, we wouldn’t be having this conversation,” says Jill’s father with emotion.

“It’s important for parents to be educated about cyberbullying because there’s no way for schools to deal with this all by themselves,” Baldwin says. “It takes a community to keep our kids safe.”

Lieutenant Tracy Hern from the Sunnyvale Department of Public Safety advises parents to monitor their children’s mobile phone use and online social networks by reading through their messages and looking at their pictures for inappropriate content.

“If your kids have a Facebook account, get one too so you can friend your kids,” Lieutenant Hern says. “Get your kids’ passwords too. But your kids must keep their passwords away from everyone else.”

Baldwin shares some general examples of cyberbullying incidents that can occur among a student body at a high school: Girls get together to instant message a target victim pretending to be a boy who’s interested in her and then they humiliate the girl. Someone takes pictures of an overweight kid undressing in the locker room and then posts the pictures online. Someone leaves threatening comments of a sexual nature on a personal web site.

“Sexting, which involves sending sexually explicit messages or pictures between mobile devices, has been my number one problem,” Baldwin says.

According to Baldwin, she has had to manage several situations where girls have sent naked pictures of themselves to their boyfriends. After the break up, the former boyfriend would send the pictures to his friends, and soon, the pictures would become widely circulated among the student body.

The good news is that members of law enforcement and the educational sector are addressing cyberbullying.

“Most of the [cyberbullying] happens at home, but if it carries over and affects [a student’s experience at school], it becomes our business,” Baldwin says. “My worst case was when some kids made a sex video that was later distributed. That sex video affected the school so it became my business [to intervene.]”

“In California, parents can be held liable for up to $30,000 per criminal incident that their child is involved in, including cyberbullying,” says Lieutenant Hern.

How to Feel Supercalifragilisticexpialidocious