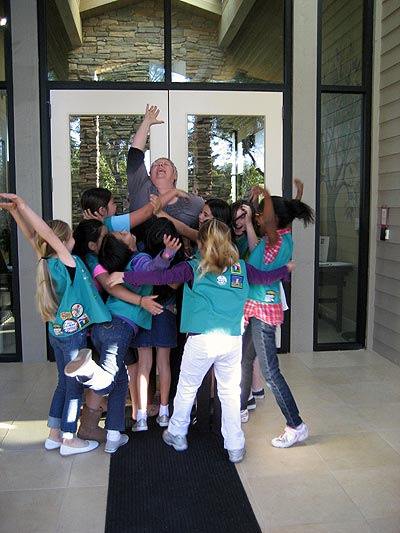 Mary Poppins isn’t the only person ever to feel that way. The Girl Scouts of Santa Clara Troop 60129 feel happy, excited, awesome, appreciated, helpful, effective, graceful, and—hold onto your hat Mary Poppins—supercalifragilisticexpialidocious about stocking the shelves of JW House with donated household and food items they collected. And they want you to know that you, too, can feel that way by serving the community.

“When you donate stuff, it makes you feel good and makes the people you donate to feel good,” says Samantha.

Kimberly and her mom had visited JW House and brought back its story to the troop. The nonprofit guest house, which opened in 2008 on the grounds of Kaiser Permanente Santa Clara, is a place of respite where families referred by social workers can spend a few hours or a few nights as their loved ones undergo treatment at the hospital.

Andrea said the troop liked the fact that the house was the idea of the late JW Knapen, a 16-year-old boy who was a cancer patient, and Alan Wong, his doctor. After touring JW House and discovering that brownies are baked every day, the girls made stocking its pantry their goal.

“We learned that lots of people stay here and can get food and live,” says Sela.

“My dad had to go to the hospital, and I can relate to how worried people are. I’m glad they have a place to stay while they’re getting better,” says Annie.

Kimberly also related personally to the families staying at JW House. “My brother went to the hospital when he broke his arm,” she says.

Once the girls decided on a donation drive for JW House (www.jwhouse.org) as their Take Action Journey Project, they divided into three teams to accomplish their goal: advertising at school to make their classmates aware of the drive; scheduling of girls to be at the collection box from 8 a.m. to 8:25 a.m. every school day; and arranging daily storage and delivery of the items at the end of the drive. Everyone helped paint the wood box that was built to hold donated items, and it was presented to JW House for outdoor storage of sports equipment.

The girls gained insights to share with other community volunteers.

“It wasn’t easy. Everything took a lot of planning,” says Audrey.

“The first few days, we didn’t get any donations. We needed to do better advertising,” says Elizabeth.

“You have to educate people about the need,” says Sela.

“Believe in yourself and your cause,” says Annie.

“One lady wouldn’t put her donation in the collection box until we sang a song to her,” recounts another girl.

“Thank you from the bottom of my heart,” says Bignell. “You’ve made people feel good here today. I’m always humbled by how generous our neighbors are.” It was a supercalifragilisticexpialidocious Mary Poppins moment.

Mission College's Pister Scholar Says "This Is Just The Beginning"

Arts & Entertainment Community
Author Erika TownePosted on December 5, 2022
While the Winchester Mystery House is famous for being a haunted piece of history – infamously so at times – many Bay Area locals...
SPONSORED