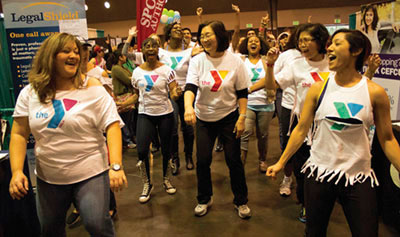 Those attending the Sports, Health and Wellness Expo at the Santa Clara Convention Center on January 26 were surprised when spontaneous dancing broke out just after 12:30 p.m.

Music could be heard throughout Exhibit Hall A as one woman started moving her arms and hips to the beat. A second woman joined – then a third and fourth. Within seconds, more than 100 people were part of the show. Expo attendees had been “flash mobbed” by YMCA of Silicon Valley.

“We did it to build our community and create impact,” said Sha Foland, senior program director of health and wellness for YMCASV. “The intention was to show the community we exist, and why we exist as well as to collaborate as one association…We have 11 branches represented and everyone here is meeting new friends and building confidence by dancing and committing to something.”

The group began practicing about two and a half months ago, holding practices at local YMCAs and sending out YouTube videos of the performance for mobbers to watch and copy. “I worked together with YMCA branch contacts and Instructors from the primary YMCA branches involved in this, as well as Mike Aguilera [the] expo organizer to coordinate logistics, practice times, etc.,” said Foland. “Enthusiasm was created via email, in YMCA classes and at staff meetings at all branches in our association. A registration link was created for anyone that wanted to join us from the YMCA of Silicon Valley and updates were sent to all participants throughout the planning process. We had 155 total registrations.”

The results of YMCASV’s efforts raised awareness about the organization and its offerings. “I feel incredible about the way it all worked out,” said Foland. “The feedback I have gotten has all been very positive…right after it finished a few members asked if we could do it again right then and there! It was truly a collaborative effort and that shows in the enthusiasm and result…It was mission accomplished in my book – if you take an idea and put passion, collaboration and pride behind it, the sky is the limit.”

In addition to YMCASV, exhibitors included health drink makers, chiropractors, massage therapists and fitness companies. Sports were also well-represented by the San Jose Earthquakes and San Jose Sabercats, who brought two Saber Kittens and players to promote sports, health and wellness to those attending the expo.

Four presentations were also given throughout the afternoon. Steaphen Fick, founder of the Davenriche Martial Arts School, opened the event with a 30 minute presentation on psychological awareness and verbal skills to stay safe entitled “Be Safe, Escape and Evade – Beyond Self-Defense.” Nate Moore from Combat Circuit ended the day with “The Ultimate Workout to Stay Fit and Lose Weight,” a lecture on how to exercise using a combination of combat fitness and martial arts.

The event was produced by Aguilera and Associates. For more information on the expo visit www.sportswellnessexpo.com. Visit https://www.youtube.com/watch?v=wKGQLOjRAAU to see a video of the flash mob and www.ymcasv.org to learn more about YMCA of Silicon Valley.