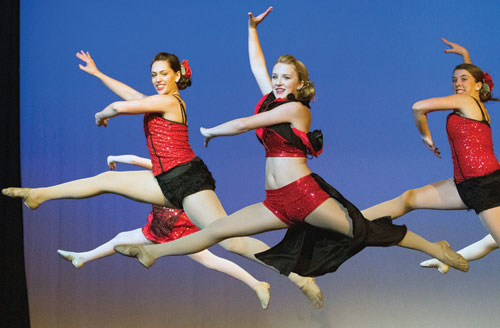 From singers and musicians to thespians and dancers, Santa Clara is home to undeniable talent. On January 26, the city proved it when 14 acts took the Community Recreation Center stage for the fourth annual Santa Clara’s Got Talent competition.

In a new twist, instead of awarding a straight first, second and third place price, the acts were divided into groups based on their talent. “This year we’re doing three categories – singer/musicians, singers, and danceer and within each of those groups there will be a first prize,” said Recreation Program Supervisor Jennifer Herb. “Then there will also be the newly added audience choice.”

After the competition portion of the night was complete, last year’s third place winner, Calvin Canchola, sang for the audience as the votes were being tallied. When his set was complete, the judges still hadn’t finished tabulating, so the Santa Clara Youth Commission entertained the crowd with funky dance moves, which garnered many laughs. Eventually the curtain was opened and all of the competitors danced to Miley Cyrus’ “Party in the USA” while A Lovely Bunch of Coconuts’ guitar player Nevin Hall flipped across the stage.

When the results came in, there were both cheers and heartbreak.

“It’s shocking,” added L’Heureux, a senior at Santa Clara High School. “To win both of those is just amazing. All of our hard work has paid off.”

A Lovely Bunch of Coconuts comprised of Santa Clara High School seniors Hall, Jake Cavicchia, and Henry Pham and DeAnza College sophomore Daniel DeYoung beat out the other musicians to take their prize. And, Tiana Milan Najeeb-Brush won in the singers category for her rendition of Adele’s “Skyfall.” Milan Najeeb-Brush, whose vocals were fantastic, had to beat out equally wonderful performances by the other competitors to win.

Each wining group received at check for $250, while the audience favorite was awarded a trophy. The proceeds from Santa Clara’s Got Talent go to the Youth Commission Sponsor Scholarship Award, which will be given away at the end of the year. The competition is open to any resident of Santa Clara, regardless of age. Auditions begin in December for the January performance.