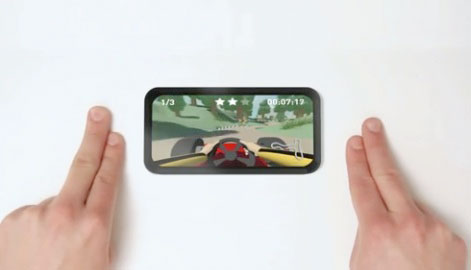 At the Consumer Electronics Show (CES) in Las Vegas a few weeks ago, Santa Clara company Neonode (neonode.com) made quite a splash – literally – with its trademarked “MultiSensing” user interface technology that included a water-submerged device and high-tech steering wheel.

MultiSensing lets users interact with devices touchlessly using gestures in a three-dimensional area, as well as with touch using a finger, paintbrush, stylus or an ordinary pen. (It also works if you have gloves on. Conventional touch screens require the connection with your skin to register input.)

But Neonode’s touchless sensing technology isn’t the company’s first ground-breaking user interface. In 2004, the company manufactured the first touch-enabled screen for a mobile phone, according to Neonode Americas VP Douglas Young. (The company also holds the patent on the familiar touchscreen “slide to unlock” feature.)

“When we took the mobile phone to carriers they told us they didn’t see any market for a touch screen phone,” recalls Young. In 2008, Neonode stopped building consumer devices, and focused on advancing its optical screen technology, the zForce system-on-a-chip. In 2012 Neonode received a patent for its gesture-based interface.

The company has also engineered speed – it operates, literally, at the speed of light – energy efficiency, a small footprint and low mass production cost ($2 per unit) into its MultiSensing system. Today the technology is used in many popular e-readers, as well as specialty devices such as Oregon Scientific’s MEEP children’s tablet.

But even the innovations on display at CES don’t begin to tap the potential of the optical technology, says Young, recalling another transformative moment in his long career in high-tech. “I was with IBM when they came out with the first PC. We all looked at it and said, ‘What can we do with this?'”

You can see some of the things that Neonode featured at CES without the cost of a trip to Las Vegas by visiting www.neonode.com/ces2013/.

A Decade of Fun