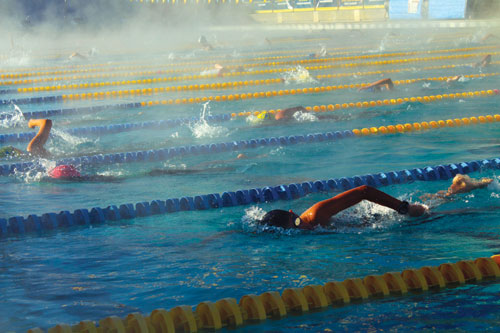 Despite near freezing temperatures, members of the Santa Clara Swim Club eagerly dove into the 80-degree water and swam laps as part of the organization’s January 12 Swim-A-Thon event.

“We use this as our annual fundraiser,” continued Benes. “It’s the only fundraiser the kids do. It’s to help pay for the capital expenses that come with all of our pools and travel…They swim for an hour straight and they can’t stop. They can get out to go to the bathroom and that’s it, but they have to keep going. They can kick, they can pull, they can do whatever they want as long as they swim the whole time. Any stroke – any of the legal strokes – is welcome.”

Each of the 150 participants collected donations, either through a donation page online or in person. Donors were able to sponsor at a flat rate or per lap swam. The results of the fundraiser have been better than expected.

“In our first year, we raised $10,000,” said Benes. “Last year we raised $20,000. We’re on track right now to get close to $30,000 this year so it’s really exciting. We’re really excited. We also added our Masters, our adults, this year. They’re doing their own version of a Swim-A-Thon, called a Postal Swim. It’s called a Postal Swim because they submit their results to USMS (United States Masters Swimming) to be recorded. So, they all donated $50 and they’re swimming for an hour straight as well.”

Swimmers who raised a minimum of $25 were able to participate in a coach-ran dive and turn clinic, while swimmers raising $50 or more received entrance into the clinic and an official Swim-A-Thon t-shirt. Anyone raising $100 or more also received a USA Swimming shirt. Each of the swimmers were treated to a pancake breakfast with dairy, gluten and egg-free pancakes available. The person raising the most funds will receive an iPad Mini (results will not be final until later this week).

The funds raised, as Benes mentioned, will partially go to pay for expenses relating to the pools. “We have to finish refurbishing our blocks and then we’re going to be working more at Mary Gomez Park,” said Benes. “So there’s a lot of things – lane lines, pool covers, flags, equipment – that we’re going to need when we move over there in March…We’re moving more kids there. We’ve grown to the point where we need more space.”

Additionally, some of the funds raised will go to team-centered outings like pizza parties and ice skating. “Swimming is an individual sport, but we are very much a team,” said Benes.

For more information on Santa Clara Swim Club including information on its non-competitive programs like Learn to Swim and the Masters Program visit www.santaclaraswimclub.org.