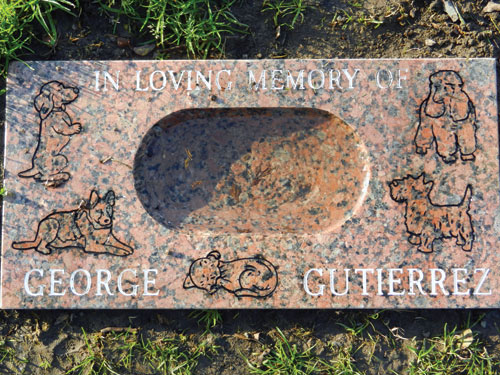 When 59-year-old George Gutierrez suddenly passed away from a heart attack in 2011, his friends and family were devastated. He had no prior history of heart-related problems and there were no known signs leading up to the fateful event. In fact, Gutierrez was an avid walker. Almost every day he would meet up with his friends, Denise Martin and Jack Acevedo, and the three would walk their dogs together at Mission City Memorial Park.

“It started over a love of dogs,” said Martin. “I started walking down at the cemetery because it seemed like a safe place to walk the dogs…One day I met George and his two dogs [Sprout and Zoe] and we started walking together.” Years later, Acevedo joined the pair.

“A year ago, on December 15 George died of a heart attack,” continued Martin. “Jack and I were devastated. [George] had no history of illness and was in great shape. It took a couple of weeks before I could go back to the park.”

As time went on, Martin and Acevedo began looking for a way to pay tribute to their friend. “Jack came up with the idea of a dog bowl and I followed it up and spoke to Larry [DeJanvier] the superintendent who put me in touch with James Blum who does the headstones,” said Martin. “[James] said he had the perfect piece of granite to fashion a dog bowl and he made it. James donated the dog bowl. He wouldn’t accept any money…the fact that we were doing it for a friend was enough for him.”

Their requests were simple – a stone bowl that was at least four inches deep to hold a little water for dogs. If possible, they wanted it to say “In loving memory of George.” Blum blew them away with the bowl. “James put on dogs of all different shapes and sizes and under George’s name he put a sleeping dog – it couldn’t be more perfect,” said Martin.

A few weeks ago Martin was riding her bike near the cemetery and she saw a big Labrador retriever drinking from the bowl. It made her day. “I had a big smile on my face and thought that George would have been thrilled to bits,” said Martin. “We just can’t believe how lucky we are to have known such a wonderful man.”

A Decade of Fun