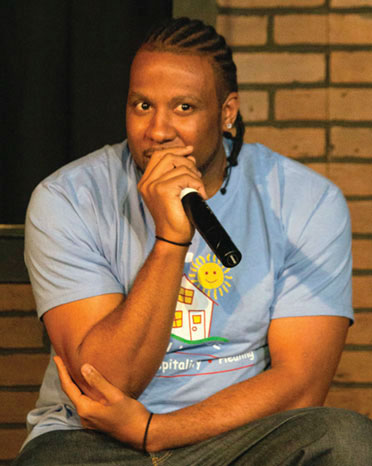 “During the planning stages of Comedy Night, I approached Tony, our comedian liaison, with the idea of joining the line up as a surprise and personal challenge to be funny,” said Rangel. “Tony liked the idea and I wrote all of my own material…I had never done stand up before. Bright lights in my eyes, laughs from the crowd and a community laughing for good: it was exhilarating!”

After opening the show with his own routine, Woods kept the crowd alert by bringing them into the performance between performers and mercilessly taunting one particular audience member who forgot to turn off his phone’s GPS system upon arriving at the venue. “I love doing crowd work,” said Woods. “I like to go off script to where I’m taking a risk. I always need, every set I do, even when I’m not hosting, to go off script a little bit. I need to take a risk or else I just get bored up there because I’ve said these jokes for years, and I can’t go on without making something where there’s a possibility I could fail.”

And, while the risk paid off and Woods had the audience in stitches with his persistent badgering throughout the night, Prasad’s impression of her mother, a typical Indian woman, may have garnered the biggest laughs.

Greg Williams spent much of his set cracking jokes about his job as a nurse, while Gail Williams also touched on office humor. Bates stuck with traditionally funny topics like sex and dating, and Zadok played to the crowd by doing a bit on getting blood drawn. Harrison ended the night with some racial and dating humor.

“[YPAC board member] Alan [Perez] is a very good friend of mine and he asked me if I wanted to put together a show,” said Harrison. “They he told me what JW House was all about and I was like ‘I’m on board.’ We had everyone laughing and we hope to come back next year and do a better, bigger show…We had fun tonight.”

“The crowd was really cool,” added Woods. “I think it’s because it was a lot of nurses and medical workers who have seen everything, and usually those people have the biggest hearts but the darkest sense of humor.”

The event netted over $1,800 for JW House. For additional information visit www.jwhouse.org.