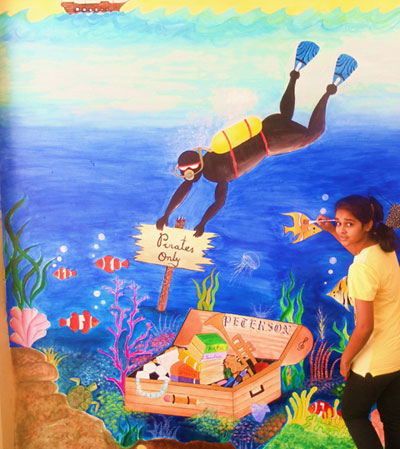 Sumaiya Elahi was born in Bangladesh. When she was in the sixth grade, she and her family moved to the United States and settled in Santa Clara. Elahi enrolled in Peterson Middle School not knowing what to expect from an American junior high.

“At first it was a scary experience for me because I just moved into a country I never lived in before,” Elahi says. “As I got adjusted to the environment and the people around me, things just flowed. I started feeling more comfortable with all the people. I made friends and enjoyed the teachers at Peterson. The thing that’s cool about Santa Clara is that there’s a lot of diversity.”

When Elahi was in the eighth grade, one of her teachers, Mr. Advincula, commended Elahi for her artistic abilities and asked if she would be interested in painting a mural at the school.

“Back then Peterson was under construction, and the other murals artists have done before then were demolished,” Elahi says. “So first, I sketched out a mural draft related to the pirate theme because the mascot for Peterson Middle School is the pirate. After I sketched out the draft, I went to Mrs. Harris- she’s the principal of Peterson. She saw my artwork and was very impressed. Because of the construction going on, I was held back from doing the mural for a year.”

Elahi went on to enjoy her first year at Wilcox High School. But she never forgot about her endeavor to present a gift of art to her former middle school. Earlier this summer, this Wilcox sophomore received the official go-ahead to paint the mural at Peterson.

“We picked a wall near the girls’ locker room,” Elahi says. “The wall was 11 feet by eight feet- that is the size of my mural. I used thick acrylic paints to paint the mural, which shows a diver swimming deep into the ocean and reaching towards the treasure that Peterson owns.”

The mural, titled “Our Own Hidden Treasure,” represents 80 hours of community service on Elahi’s part. For a month and two days, Elahi would go to the school and work for four to five hours each day on the mural. She worked alone, and a janitor set up scaffolding for her so she could reach up and paint the skies at the top of the wall.

“I worked all alone because I wanted to challenge myself,” Elahi says. “It was fascinating to see something sketched on a piece of paper and watch it come alive on a wall. I learned a lot of things while working on this project because it was a good test of my time management skills.”

“Technology is a really big thing in our world,” Elahi continues. “At the same time, art- whether it’s music, fashion, painting, or dance- should also be recognized because those are the things that are also part of our everyday life. A creative touch makes everything look better.”

Checking in on Starting Arts