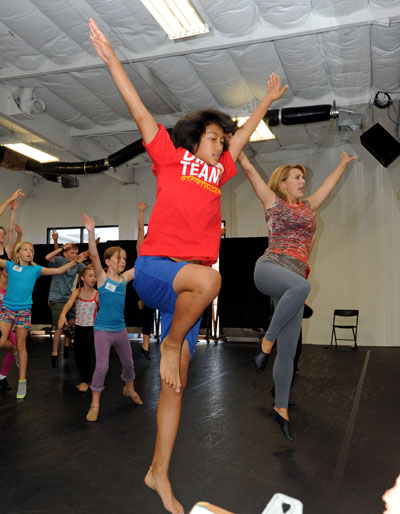 Friends from middle school told me I should audition with Starting Arts and I did. It was spectacular. People here are so welcoming and it feels like being part of a great family. This opinion of Starting Arts, expressed by Eric, a 14-year old dancer from Prospect High School in Saratoga, has been echoed over and over again by many other student actors. I’ve been dancing since I was born, but I’ve been working on singing and acting for the past six months. It would be so incredible to be in the Dream Team production.

Spectacular, Exciting, A lot of fun. Those are just some of the phrases used to describe the Starting Arts programs. On Saturday, August 27, Staring Arts held its second audition for the 2011-2012 Dream Team. At Saturday’s audition and one held previously, more than 70 students from 4th through the 12th grades, representing more than a half-dozen Bay Area school districts, gave it their all in an attempt to be selected. Students were asked to prepare a one-minute monologue, sing a 16-bar song from a musical and learn a dance combination taught by Dream Team Dance Director, Kelly Velasquez.

Even though getting accepted into the program can be a daunting task, the enthusiasm and level of maturity displayed by the student actors is almost as amazing as the skills they will display when the curtain rises. The program is incredible, stated Luna, a 10-year old at Bowers Elementary in Santa Clara. I love to sing and have been since Kindergarten. I really hope to make it into the Dream Team. Her age belied the maturity she displayed being interviewed and during the dance audition.

This was the case of nearly all the actors auditioning on Saturday. Khoi Le, a regular in Staring Arts’ productions, was one of the veterans demonstrating the dance moves for the auditioning students. Watching Khoi, it’s easy to forget just how young the actors are, as he seemed to glide across the room as effortlessly as someone with many more years of experience.

According to a press release from Kelly Velasquez, The Dream Team, directed by Amy Baker, is a select group of young artists ranging in age from 10 to 18 years. Through the Staring Arts program, team members receive weekly expert training in music and vocal, dance and theater along with monthly workshops with arts professionals. Specialized workshops are designed to develop a variety of skills including auditioning, performance technique, stage combat and stage management.

Starting this month, the Dream Team will begin rehearsals for their showcase performance in January 2012. In June, they will present their mainstage production of Les Miserables. Both productions will take place at the Santa Clara Performing Arts Center.

There is a chance to catch a dream team production before then. On Sunday, September 4, the Dream Team and Starting Arts will be special guest performers at Breaking the Sound Barrier, a free multicultural extravaganza of music and dance at the Morgan Hill Community and Cultural Center Outdoor Amphitheater. For more information on Starting Arts and the Dream Team, please visit: www.startingarts.com.