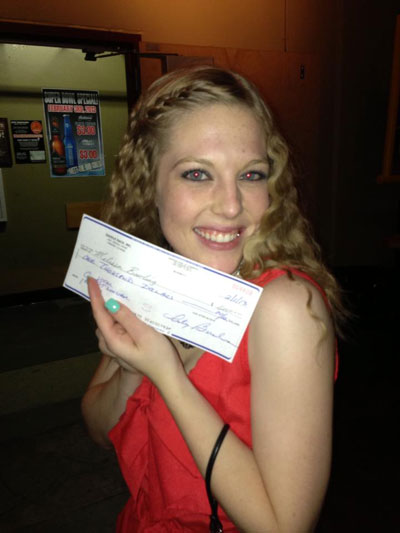 Bowling qualified for the competition in December, singing “Gunpowder and Lead” by Miranda Lambert, accompanied by the house band, Diablo Road. Contestants moving on to the semi-finals were chosen by audience vote.

The semi-finals were held January 10 and 17, with 20 competitors vying to be among the lucky 10 selected to compete in the finals. Performing for a full house that included 15 of her friends and family, Bowling, accompanied by Diablo Road, sang “Here For the Party” by Gretchen Wilson. She chose the song “because it’s a fun song to sing and a great way to get the crowd involved and on their feet.”

Bowling qualified for the finals and was the eighth contestant to perform on January 31. Sticking with “Here for the Party,” Bowling received the most audience votes and claimed the $1,000 first place prize. “Friends and family came out to support again but I ended up with 38 votes, which included crowd members I didn’t even know!”

Chuckles for a Cause