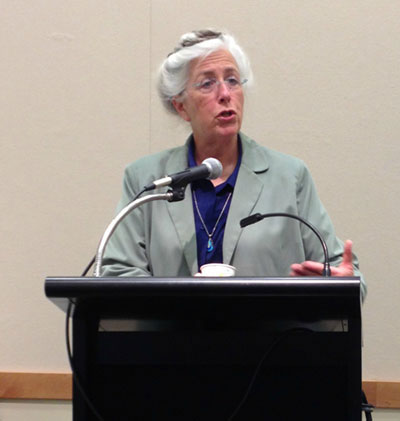 Santa Clara City Library goers were in for a treat on the evening of Feb. 4th. Best-selling mystery author Laurie R. King was paying a visit and she was bringing her wit and sense of humor with her. Wearing a bold navy shirt and a pale green jacket with her hair elegantly swept up into her trademark bun, King stood behind the podium and shared the reason for her visit with the audience.

“When I realized my 20th writing birthday was coming up, I decided to do a personal thank you to those who have supported me from the beginning,” King says. “Libraries [and librarians] have really supported me, and having this celebration is my way of thanking them.”

“It’s wonderful to be able to write stories and make things up,” she says. “I’m not gay. I’m not married to Sherlock Holmes. I’m not British.”

King tries to avoid incorporating what she calls the Jessica Fletcher (“Murder She Wrote”) syndrome into her work.

“You talk to someone who always happens to be investigating and [coming across] a murder,” says King as the audience chuckles. “This isn’t the kind of person you’d invite over for dinner. You wouldn’t even want to get into a car with her.”

“I believe strongly in traditional publishing,” King continues. “If I publish my books only as e-books, nobody would buy them. I need an editor.”

King’s stories have taken place in exotic locations around the world, including India, Morocco, and England. When asked about how she creates her vibrant settings, King responds that she often writes about places she has some familiarity with.

“[I write about] how the countryside feels, what you see when you walk down the street,” she says. “There are a few places I’ve written about that I haven’t been to. In [one of my books], I write about Vietnam even though I haven’t been there. But there is so much information and so many videos out there about Vietnam; it isn’t hard to know how that place was in the ’60s.”

After the talk, fans purchased books and waited in line to have a moment of face time with King, gracious and warm as she signed her books.

Bob, a fan, points out a cleverly written passage in “Locked Rooms,” one of King’s books set in San Francisco.

“She writes gracefully, intelligently,” he says. “I’ve read all her books.”

Ever since Peggy Lundie picked up “The Beekeeper’s Apprentice,” another book written by King, she has been a devoted fan.

“I came across this book in the library and I just fell in love with it,” Lundie says. “When I saw there were more books, I was thrilled. I’m ecstatic to be here. She’s one of my favorite authors.”