On Aug. 10 from 3 to 6 p.m., Roberta Jones Junior Theatre (RJJT) will throw its 50th Anniversary Celebration at the Community Recreation Center.

“We are hoping that people from the program for the last 50 years will come back for the reunion,” said Kevin Cornelius, Recreation Supervisor for the Santa Clara City Parks and Recreation Department. “We will have the auditorium set up with pictures from 50 years of productions. We will have a special presentation at 5 p.m. to commemorate the anniversary. Tickets are free. People can get them on our web site at www.rjjt.org to reserve a free ticket. Space isn’t unlimited.”

When Cornelius was 11 years old, he performed in his first RJJT show where he played a puppet in the 1979 production of “Pinocchio.” Other roles he played in RJJT have included Jack in “Jack and the Beanstalk” and Charlie Brown in “You’re a Good Man, Charlie Brown.”

“I’ve been in about 35-40 shows at the junior theater, and I’ve been working as the supervisor for the program since 2001,” said Cornelius, who has worked on 80 to 90 shows as production staff. “My favorite thing about being in the shows was the friendships I was able to make with the fellow participants and with Roberta Jones herself, who was a very kind person. 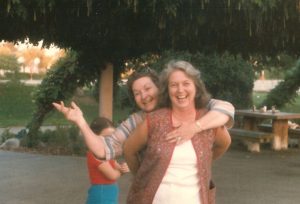 “The group was founded by Roberta Jones and she was the person who ran the program for the first 32 years,” continued Cornelius. “At the end of her career, the City Council held a special meeting in her honor and thanked her for her incredible years of service and named her theater after her to honor her.”

Cornelius discussed how he has seen the theatre evolve over the years.

“Since 1969, when the Santa Clara Junior Theater started, we have more elaborate facilities we can use now,” Cornelius said. “We have increased resources over the years in order to expand ourselves technically, especially since we were able to move into the Mission City Center for Performing Arts and use that facility for two productions a year. That theater has a larger stage and a lot of technical elements we don’t have at the Community Recreation Center. We have been able to do larger and more complicated sets and lighting.”

Today Kelli Vergano works at the Community Recreation Center. She also works on ticket sales for RJJT. Around 2004 or 2005, Vergano performed in her first RJJT show at nine years old where she played a townsperson in “Beauty and the Beast.” Vergano went on to be in about 30 more shows. During this time, she has seen changes in RJJT as well.

“When I joined RJJT, there were only a handful of boys. Now there is a good mixture of boys and girls,” Vergano said. “We also never did shows with aerial special effects where people flew but now there are shows where people can fly. Some of the instructors are different now than the instructors I knew before. But some of them are still here. The style of organizing the shows has remained the same.

“I met my best friend in the program,” Vergano continued. “I used to be really shy and being in RJJT brought me out of my shell.”