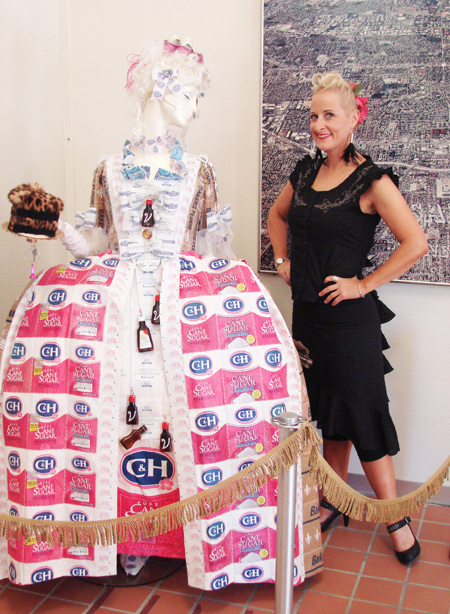 “When is City Hall not City Hall,” began Vice Mayor Patricia Mahan in her address to those in attendance at the City of Santa Clara’s “The Fine Art of Recycling” Sculpture Exhibition reception on Saturday, October 22. “When it’s turned into an art gallery.”

“If you’ll notice the pieces,” continued Mahan. “They incorporate recycled materials. You know, bits and pieces from here and there – things that people would consider junk or things that people would toss away. Somehow the artist’s mind and the artist’s conception brings all of these ideas and various elements into one coherent piece. To make something that’s beautiful, something that comes alive.”

“We’re really pleased to have this exhibit with us at City Hall over the next six months. What’s also interesting to me about this particular event is that it brings together so many different segments of our community. Mission College is represented here; the Triton Museum is represented here so art is a way to bring the community together. I’m a strong believer in that…Santa Clara really is an arts and cultural city. We encourage the arts and we support the arts at the city level in many, various ways because we know what art gives to the community,” said Mahan.

Three violinists from the Mission College Symphony provided the entertainment for the event and art students from Wilcox High School served as docents throughout the afternoon.

After Mahan’s speech, various awards were handed out. Merit Awards were given to Gerry Beers for her shredded junk mail piece, The Orange Balloon; John Hughs for his cardboard sculpture, Obelisk No. 2; Peter Langenback for a mixed materials entry titled Moca Latte Java Man; Jon Kerpel for Imperial Temple for Creatures, created out of various recycled objects; Jeff Own for a steel and brass piece called Keymaster; and Slava Yanopolsky for a sculpture created out of toilet paper and a typewriter, titled An Unfinished Story.

A plaque and $100 prize was given to Michelle Feulner-Castro for her painting of two people in love on an ottoman, Otto Be a Love Seat. The winner of a plaque and $250 prize was Robert Haemmerling’s dog sculpture, Victor, created out of chair parts, wood and metal.

“I’m very happy and honored,” said Haemmerling of his award. “I love showing here in the first place and just to win an award – that’s icing on the cake.”

The winner of Best in Show and a $500 prize was Linbrook High School art teacher, Charlotte Kruk, with her wearable sculpture piece, Charla Antionette…Let Me Make Cake. The Victorian-style dress was created entirely out of the materials used to bake a cake as a play on the often incorrectly attributed “let them eat cake” quote by Marie Antionette.

When the announcement for Best in Show was made, almost immediately Preston Metcalf of the Triton Museum of Art stood up to make a second announcement. “Upon seeing [Kruk’s] beautiful dress sculpture, I brought the director, George Rivera, over and he and I said why have we not shown her in the past? I’m very pleased to announce to everybody what Charlotte learned just a few days back. Charlotte has been awarded a solo exhibition at the Triton Museum of Art.”

“This award is such an honor,” said Kruk. “I’ve been rejected in the past, so to actually walk away with Best in Show is totally amazing.”

“To have my students turn up at this event is incredibly validating,” continued Kruk. “So, it’s sort of like to get them to their first art exhibition opening reception is a big deal and, I don’t know, for me to see them here is pretty rewarding.”

“The Fine Art of Recycling” will be at City Hall from now until March 31, 2012. For information on the exhibit visit www.santaclara.gov.