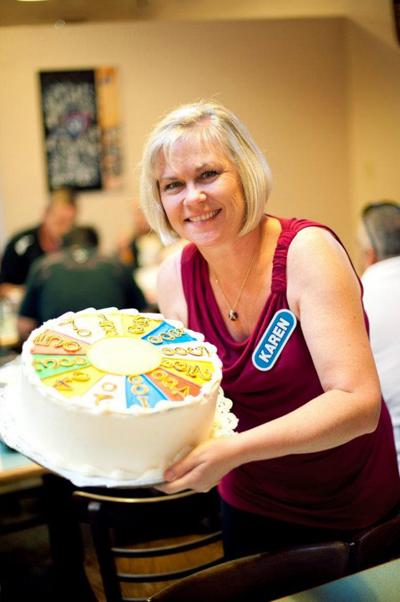 When Karen Buchanan of Santa Clara signed up for a Vanna White look-alike contest 18 years ago, she never dreamed she would one day be a winner on the popular “Wheel of Fortune” TV game show where White has been the glamorous hostess since 1982. The odds were against it.

Out of more than six million applicants in a recent year, only about 600 were chosen. While Buchanan didn’t win the Vanna White look-alike contest, the lucky lady and her 23-year-old nephew, Ryan Jensen of San Diego, did get chosen as contestants on the “Wheel of Fortune” show that aired September 19th on ABC channel 7.

Jensen applied to be a contestant in 2008 but didn’t hear anything until receiving an e-mail from Sony Entertainment Studios on July 5, 2011. He invited his aunt to join him in trying out for the family week show, and on July 7, Buchanan flew at her own expense to Los Angeles to audition with about 50 other people at the DoubleTree in Culver City.

“I told my story about being in a Vanna White look-alike contest and how I knew it was hard to believe because I had aged 18 years and Vanna, as we all know, didn’t age a day,” says Buchanan. Her story drew a lot of laughs, but she and her nephew initially didn’t get chosen. Then unexpectedly on July 13, they got a call inviting them to be contestants on July 15.

The “Wheel of Fortune” contestant who scores the highest overall is the winner. Contestants win rounds by being the first to figure out what an unknown saying is by guessing its letters, much like Hangman. They spin a 4,000-pound wheel to earn a dollar value for each correctly guessed letter.

Buchanan and Jensen each won trips for two to St. Maarten and $5,000 cash. Buchanan plans to donate her post-tax cash winnings, which she won’t receive until January, to the nonprofit Hands of Hope (www.hohafrica.org) to dig wells for clean drinking water in Zimbabwe. She hosted a “Wheel of Fortune” viewing party September 19 and raised about $500 additional from donations for handmade “Would you like to buy a vowel?” key chains and raffle prizes.

“This was such an extraordinary and unexpected event in my life…. and then to win and to find out that a charity that I have a heart for is in need of funds specifically for what I wanted to donate to…well, I think that if you give God the reins of your life, He will take you on some very amazing rides! I’m excited, nervous, humbled,” says Buchanan.

“The Wheel of Fortune” was created by Merv Griffin, premiering in 1975. It is the longest-running syndicated television game show in history. For free tickets to be in the audience, visit http://www.wheeloffortuneinfo.com/index.html or call (818) 985-8811. If you want to be a contestant, good luck!