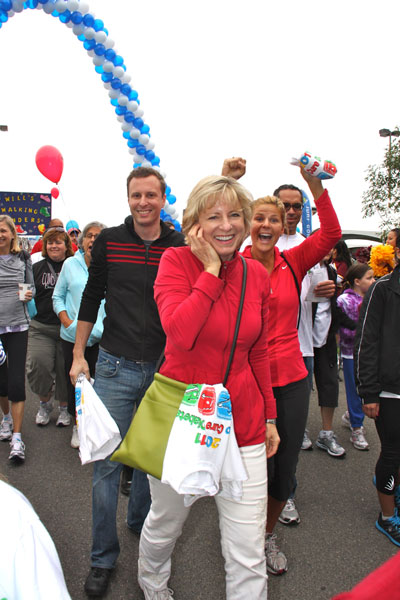 Most people know Lisa Lang as a consultant for the San Francisco 49ers and one of the faces behind the stadium campaign here in Santa Clara. What most people don’t know is that Lang is also a mother to two children. One of them has type 1 diabetes.

“Our daughter Sara was diagnosed with type 1 diabetes when she was 9,” Lisa says. “For us, this came out of the blue. She became very ill- I thought she had the flu. We put her in intensive care at Stanford Hospital- she was there for over a week. We barely caught it in time. She has gone on to college and has a happy life but it’s a difficult day-to-day existence for people who are insulin dependent. She has to test her blood sugar five or six times a day and adjust the insulin accordingly. There’s no cure for the disease right now.”

Lisa and her husband, son, and daughter are active in the Juvenile Diabetes Research Foundation (JDRF). In fact, on Oct.9, the Lang/Hickethier family put on their walking shoes at Great America and participated in one of the JDRF Greater Bay Area Chapter’s Walks to Cure Diabetes occurring this month. With 1300 participants, this one walk raised over $450,000.

“The JDRF is raising more money than any organization in the world for type 1 and type 2 diabetes, and 80 percent of the money raised goes directly towards research and education,” Lisa says.

Sara Lang, an account executive at Cumulus Media, hopes the recent JDRF Walk to Cure Diabetes gave other participants new to the diabetes community a chance to find comfort. She thinks it’s important for diabetes patients to connect with each other.

“When I was a child, I went to a camp [for diabetics] and so growing up, I had a network of friends who had type 1 diabetes,” Sara says. “My family has always supported me. I remember being at the hospital as a kid and my parents would sleep on the floor at my side. My brother has also been supportive of me in so many ways.”

In fact, Sara’s brother, Dylan Lang, was a team captain for the walk at Great America. Currently a program manager at Google, Dylan encouraged his co-workers to participate in the walk.

“The whole family has been involved with Type 1 Diabetes [awareness] since Sara was diagnosed,” Dylan says. “It’s good to develop a network and let those parents with newly diagnosed children interact and share stories with families like ours.”

Dylan and Sara share that new cases of juvenile diabetes are on the rise. Unfortunately, because very young children can get juvenile diabetes, not all children afflicted with this disease can articulate their symptoms when they are not feeling well.

Sara is hopeful that a cure for diabetes is out there and believes the money raised at the JDRF Walks to Cure Diabetes this month can help bring researchers closer to finding better treatments.

“JDRF is a world leader in diabetes research,” she says.

There are three more local Walks to Cure Diabetes coming up in October. Visit the local chapter of the Juvenile Diabetes Research Foundation at jdrfbayarea.org/walk/ for more information.