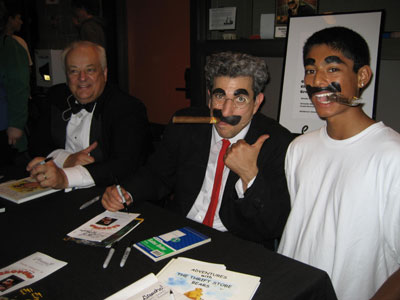 Award-winning actor Frank Ferrante is tireless in his energetic, quick-witted portrayal of Groucho Marx, the legendary American comedian he has admired since he was a teenager and impersonated for almost three decades in more than 2,500 performances. But don’t worry about Ferrante getting confused about who he really is.

“It’s different every night; we are always tweaking the show. Every night we try to be better,” says Ferrante after his sold-out performance Saturday night of “An Evening with Groucho,” the first event in the SCU Presents Visiting Artist Series, held in the Louis B. Mayer Theater on the Santa Clara University campus.

“Every time we do the show, there are new people and circumstances. About one-third of the show is improvised,” says Ferrante, adding, “It’s lucky to have a show to grow old with.” Now 48, the native Californian was 13 when he met Groucho at a book signing his dad took him to in 1976. Groucho died the following year.

“Groucho was to me the God of comedy—funny, brash, irreverent,” Ferrante says. Groucho, born in 1890, was the middle one of five brothers who starred in a comedy act that took them from Vaudeville and Broadway to the movies.

Music director and on-stage pianist Jim Furmston set the rhythm for Ferrante through every classic wisecrack, anecdote, and song of the 90-minute show. Some of the jokes were suitable for the youngsters in the audience only because they probably didn’t get the sly—and sometimes not so sly—innuendos.

“It’s an aerial view of Mae West,” Ferrante says as he has two bald men put their heads together.

He drew the audience of almost 600 into the act throughout the show, poking fun at them for laughs.

“Is there a doctor in the house?” he asks. A man in the front row raises his hand. “What kind of doctor are you?”

“A chiropractor,” the doctor answers.

“I mean a real doctor,” says Ferrante. “Are you still practicing? You’ll get it someday.”

“My 97-year-old mother loved watching the Groucho Show. Groucho was a master at kibitzing with his guests. Ferrante has the same knack,” says Gloria Heistein of Santa Clara.

“We grew up with Groucho and “You Bet Your Life,” says Phyllis Shea of Saratoga, in the audience with her husband, Mike, an SCU alumnus. “Ferrante really looks like Groucho.”

“This is really good. I heard my parents and grandparents talk about Groucho, and Bugs Bunny satirized him, but until tonight, I didn’t realize so many jokes my granddad says are from him,” says SCU sophomore Mary Helen.

“Tonight was exactly what I dreamed of when I put the show together,” says Butch Coyne, SCU Presents director. “This is a down time economically, and we wanted to get people to laugh.”

Audience members lined up for Ferrante’s autograph after the show. “Be kind,” he writes on the program of the Santa Clara Weekly reporter covering his performance.