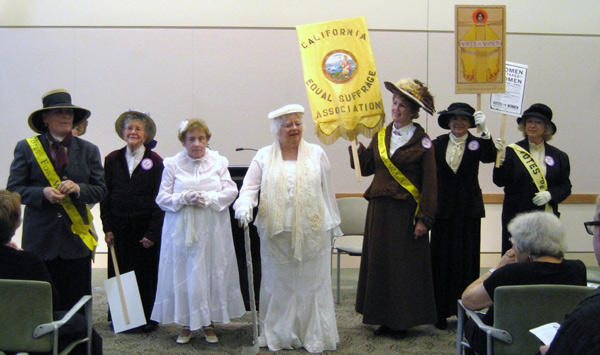 The women of California got the vote 100 years ago this October, nine years before the 19th amendment to the U.S. Constitution gave the vote to all American women. The narrowly successful struggle for the vote in Santa Clara County in 1911 came to life Sunday afternoon at Central Park Library, 2635 Homestead Road, as the Santa Clara Players, dressed in period costume, dramatized this history in three short plays.

The dramas were part of a month-long Celebration of the Centennial of Women’s Suffrage in California, which was sponsored by the library and underwritten by the Santa Clara City Library foundation.

“An Anti-Suffrage Dialogue” is a farce written by suffragists in the early 1900s to point out the irrational arguments of the anti-suffragists. It got plenty of laughs from the 75 women and men who filled the Redwood Room as each anti-suffragist made her point.

“Women would neglect their homes.”

“It would pit women against men.”

“Women don’t understand politics. They wouldn’t know what to do with the vote.”

“Women should be devoting themselves to the comfort of a man.”

And a crowd favorite: “I know I am but a rib, so I wash the dishes.”

“This makes you pay attention to something we often take for granted. It really makes me appreciate the pioneers of the women’s movement and how hard they had to work to overcome adversity and ridicule,” says Santa Clara Player Pat Cross. “We didn’t even have the support of all women.”

“Impressions of a Canvasser,” also from the early 1900s, is a vignette in rhyme in which the suffragists quiz state senators Bartholomew Boozer and Frederick Flake on their convictions about women’s suffrage.

“Fighting for the Vote in California,” an original drama commissioned by the library, stars local historical figures as they campaign for women’s suffrage on the verge of the 1911 election. These early feminists include women such as Mary Warburton, a founding member of the Woman’s Club, and Clara Shortridge Foltz, the first woman on the Pacific Coast to practice law. The suffragists are disparaged as “discontented old maids and hungry widows” who “have lowered our sex in the eyes of the whole world.”

“My mom was a first generation American whose parents came from Italy,” says audience member Barbara Shaffer. “She never missed a vote, and I always vote. It’s important for everybody, especially women if we want our voices to be heard.”

“People were really engaged and enjoyed the dramas,” says Mary Hanel, Santa Clara Local History Librarian. “They were fictional, but they tied in real historical women at a rally in Santa Clara. Weaving fiction with real names made it more authentic.”

“We are excited to partner with the library and Santa Clara Players to do this,” says Nancy Jo Banko, President of Santa Clara Woman’s Club, which provided refreshments. The Santa Clara Players researched the early minutes of the club, founded in 1904, in writing “Fighting for the Vote in California.”

Visit http://scw.tearn.com/#!/2011/10/santa-clara-womans-club-played-key-role.html to view the October 12 Santa Clara Weekly article about the Woman’s Club’s role in getting women the vote.

An eye-catching bulletin board display chronicling the history of the women’s suffrage movement in California is in the Redwood Room through November. Bob Byrd, President of the Harris-Lass House Museum, created the display.