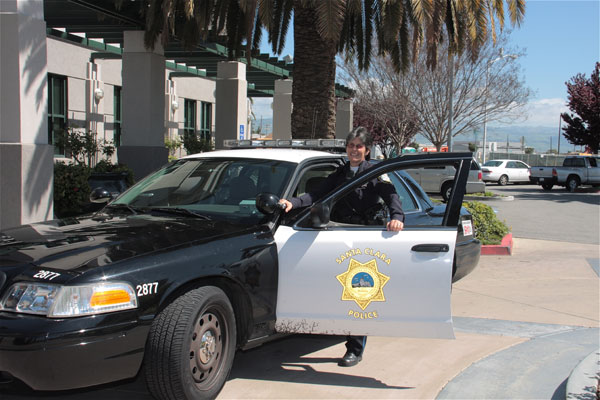 Her smile lights up a room, as the saying goes, but don’t be fooled by Santa Clara Police Officer Patti Lynch’s easygoing manner. On duty she’s quick and agile as a cheetah, and cool as steel under pressure.

A few weeks ago, the 17-year SCPD veteran took me on a ride-along to share a day in the life of a Santa Clara policewoman.

Her background’s anything but ordinary. Thanks to her petroleum engineer father she’s traveled around the world and lived in Tripoli, Singapore, and Jakarta. Lynch came to California on vacation and liked what she saw – especially compared to winters in Canada where she was then living. She stayed, taking a job as a counselor at San Jose’s Eastfield Ming Quong (EMQ) social services agency for children and families in crisis.

As she sees it, becoming a police officer wasn’t a career change. It was simply a move to a different place in the social equation. “At EMQ I worked with the victims of bad guys. I wanted to put the bad guys in jail.”

Lynch chose SCPD because she “wanted to be in a department where people knew each other. Santa Clara has the highest rating for employment qualifications.

Before taking off on patrol at noon, Lynch instructs me that if she gets shot, I’m to take the radio and say ‘five-o-five’ three times followed by ‘shots fired.’ “They’re going to ask where we are.” She points to the Garmin Nuvi GPS navigator on the dashboard.

Our first objective is tracking down a sex offender – call him Art – in a “non-compliant” status – he hasn’t ‘reported in’ since January. He’s moved and left no forwarding address. Lynch telephones a family member and leaves a message.

There are no calls so we meet Santa Clara Community Service Officer Robin Flores at the Hungry Hound for a quick lunch. The restaurant is out of its signature falafel, so we make due with hot pastrami sandwiches.

“On patrol you do everything from barking dogs to [being] first on the scene of a homicide,” explains Flores, another 17-year SCPD veteran. You’re part of a patrol team. You’re responsible for a specific section of the city and you always have a plan. Rather than have two people in a car, each officer has their own car. But two officers go to each call, a primary and fill, and there’s a division of responsibility.

“Even though [a call] may just be a barking dog,” she continues, “You check the sounds in your environment. Is something setting off the dog? You’re thinking, what kind of house is it? What kind of people are on the street? Who lives here?” You ask these questions, Flores explains, because of one inescapable fact of police work: “You put a uniform on and you’re a target.”

“You think you know but you never know,” adds Lynch. “When do you relax?” I ask. After a long pause, “I relax when I work out.”

A 911 call comes in. It’s an open line with baby sounds in the background. We’re dispatched on the call. “As soon as you get a call you’re imagining the building, you’re seeing everything behind you. I’m not even there yet and I’m already picturing it,” Lynch explains, “Sounds are key. What’s going on inside? Before I get there I want to know if there’s something going on inside.”

Lynch looks in the apartment’s kitchen window. She stands to the side of the door and knocks. Sounds inside, but no answer. The fourth time Lynch knocks and announces herself, a woman finally comes to the door. It turns out that mom was in the shower and the toddler pulled the phone down, auto-dialing 911.

We return to Art, the out-of-compliance sex offender. “We need to make sure he’s actually in violation and not registered somewhere else,” explains Lynch. She looks up information about possible addresses and employers. She leaves another message, this time on a cell phone. “So far, nothing,” she says. “I spoke to relatives. They say they haven’t seen him.”

Keeping tabs on sex offenders in the city is Lynch’s particular beat. “It’s a job that needs to be done,” she explains matter-of-factly, “and I have a little more knowledge [about it].”

Mid-afternoon, Lynch receives a call that a suspected drug dealer, we’ll call him Bob, with a $100,000 bench warrant for missing a court hearing, has been turned in by his sister. When we pull up, Lynch’s patrol partner Rob Paolinetti, already has Bob handcuffed.

Leaning his back on the squad car and crying, “I don’t know what to do,” Bob hardly looks like a drug kingpin. Lynch ushers him into the back seat. “F**ing stupid c**t,” he wails.

“What about your sister?”

It’s not his sister’s calling the police that’s setting Bob off. “She’s going to throw my tools away,” he explains. “Three thousand dollars worth of tools and she’s going to put them on the trash pile.”

“Why would she do that,” asks Lynch.

“Because she’s an a**hole. And,” he adds sullenly, “you’re helping her out.” Leaving the squad car at the police station, he says, “Shoot me now. Get this f**king unlivable life over.”

Lynch offers what consolation she can. “Well, this is going to be over.”

“No one’s going to be looking for you.”

After booking Bob in county jail, Lynch gets a call about chronic alcoholic Charlie. He called his estranged wife at work threatening suicide.

“We’ve dealt with him before,” explains Lynch. “Multiple fifty-one-fifties [involuntary 72-hour psychiatric confinement], harassing 911 calls – and that’s in 2010 alone. His wife left him. If he says anything about suicide we’re going to take him in [to the hospital] for a fifty-one-fifty.”

We arrive at the neat gray stucco house simultaneously with Officer Earl Amos. The front door is unlocked. Lynch cautiously pushes the door open. As the officers step inside, a miasma of stale booze and cigarette smoke escapes, accompanied by the scripted applause of a TV talk show.

Unshaven and gaunt, Charlie sits before a half-empty bottle of bottom-shelf vodka. “I guess rehab didn’t work,” says Amos. “We hear that you said something about suicide. You’re not thinking about hurting yourself?”

“I brought your mail in,” says Lynch. Charlie nods absently. “I’m not going to hurt myself.” It’s clear he knows exactly what words will preserve his freedom to continue this downward trajectory without official interference.

“People are going to do what they’re going to do,” Amos tells me as we leave. “[For a] fifty-one-fifty you’ve got to have ‘failure to thrive.’ If he wasn’t able to take care of himself…” he leaves the sentence unfinished.

“You can’t fix everyone’s life,” he says. “You shut the door and go on to the next call. The thing that gets you, though, is the loss of innocence.”

The biggest challenge of the job, Lynch says, “is when you can’t help people.”

Around suppertime we ride over to the Mission Town neighborhood. A densely populated neighborhood of two-story apartment houses north of El Camino, the parking lots between buildings are riddled with car-eating potholes.

“It’s an incredibly dynamic neighborhood with lots of kids,” says Lynch, as she parks by a small wedge of playground where half dozen children play next to a listing fence. The children greet Lynch with big smiles. “Did you go to school today,” she asks. Yes, they all nod. Lynch gives out stickers and chats with them for a few more minutes.

The story is different with a group of teenagers leaning on an old Cadillac. Their faces are sullen and wary, and their answers to Lynch’s greeting, guarded. Nonetheless, Lynch visits regularly on her beat. “The important thing is to have a relationship,” she says. “It’s good to know who’s in your neighborhood.”

Around sunset, after tracking down a “dine and dash” at a local restaurant, giving a warning to a driver for a “California stop” at a four-way stop, and making one last attempt to track down Art, the non-compliant sex offender, we return to the station. While Lynch sits down to do paperwork, I head for home, bone-tired.

Later, dropping off to sleep, I wonder how many more visits SCPD will make to that gray stucco house before Charlie takes rehab seriously or his luck finally runs out.