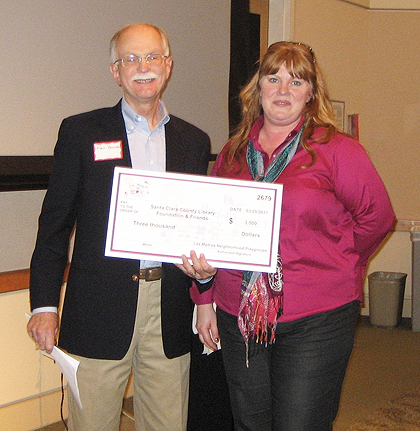 The Santa Clara Library Foundation & Friends threw a Polynesian-themed chocolate party and community grant event at Central Park Library, March 28, to decide how to spend the $25,000 they had raised selling used books. That’s right. Twenty-five thousand dollars was raised by selling the books you donated to the library in the last six months.

“We raise approximately that much every six months. It’s a testimony of how many people in this community love the library and the work it does and are willing to volunteer and donate to make it even better,” says Maria Daane, Executive Co-Director of the Santa Clara Library Foundation & Friends (www.lovethelibrary.org). Two of those people are Lee Broughman and Judy Hight, honored as 2011 outstanding volunteers.

“You may think your books are not worth much, but they may be of value. Donating them gets them out of your garage, keeps them out of the landfill, gets them into the community, and the library can use the proceeds for its programs,” says Foundation & Friends Board president Ken Young.

About ten thousand books, CDs, DVDs, and audio books, including library discards, are processed monthly. First dibs on donations goes to the library to enhance its collection, saving the library more than $69,000 in 2009-2010. Nonfiction books sold on Amazon.com net a couple of thousand dollars monthly, says Board member Mike Kirsch, who oversees Internet sales (http://www.amazon.com/shops/friends-of-santa-clara-city-library).

Kirsch designed a program to scan books to identify those with high value. In 2010, the CRC Handbook of Metal Etchants sold for $495.00; it was one of the highest-priced items ever sold. Books are shipped Mondays, Wednesdays, and Fridays, sometimes fifty on one day. “We get an awful lot of good quality books,” says Kirsch. More than 2,000 are currently listed online.

The remaining books go to the library book store, open every day with special sales on the 1st and 3rd Tuesdays of the month. Books not sold within 30 days are offered at the monthly 3rd or 4th Saturday sale, 10 a.m. to 2 p.m. Leftover books are donated to the nonprofit St. Vincent de Paul Society.

“It’s a circular thing. People buy the books, read them, and return them to sell again,” says Mary Toledo, a 2001 founding member of the Santa Clara Library Foundation & Friends.

Spending $25,000 in a couple of hours was a heady experience for the more than fifty bookish Friends of the Santa Clara Library who had gathered to over-indulge in chocolate, celebrate their fund-raising accomplishment, and vote on their top six choices, out of 14, of library programs to fund. The librarians gave campaign speeches for their pet programs, each designed to entice Santa Clara’s diverse population, including those who don’t speak or read English, to visit the library.

“More than one and a half million people pass through its doors every year,” says librarian Julie Passalacqua.

In voting, it was difficult to choose, for example, between a program to teach teenage, usually single, moms how to cultivate early literary skills in their children; jobs skills classes for job seekers; and summer reading program awards for children.

Rather than disappoint the enthusiastic librarians, individuals stepped up with an additional $3,400 so that all but one program was funded. In 2010 individuals donated $51,000.

Sandra Maat, executive director of Las Madres (lasmadres.org) presented a surprise check for $3,000 to enhance the library’s family place. Other recent program grants and gifts: Kaiser Permanente (contributing $25,000 for health and wellness books), the Beautiful Foundation, the Mission City Community Fund, the National Endowment for the Arts, Santa Clara Lions Club, and Aldyth Parle. Where would we be without Friends?