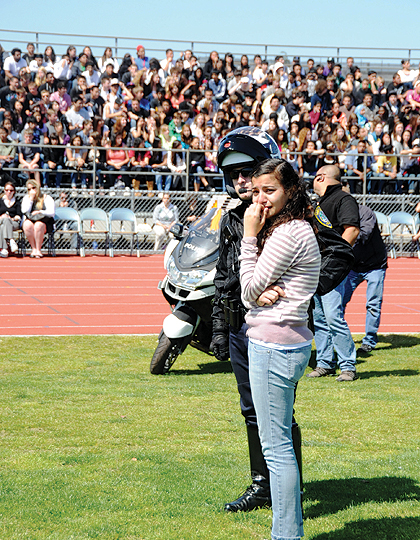 The scene is repeated far too often, played out in cities and towns as far apart as they are diverse. And the statistics are even more shocking. “Every 15 minutes someone dies as the result of an alcohol related collision.” Stating the statistic that way makes it seem simplistic or far too easy to comprehend. But the reality is something much different. The reality becomes even more clear and realistic when the statistic is someone we know; someone close to us; someone, such as a co-worker, friend or classmate.

On a Wednesday afternoon, a traffic accident involving a Mercedes and a Volkswagen occurred at Wilcox High School in Santa Clara. Ejected from the force of the impact and dead at the scene was Luke Reilly, the victim of a drunk-driving accident. In an instant, the driver, Kenny Gan, forever changed his life and those of his friends – killing one classmate and sending two others, Kendal Prokopakis and Maria Maldonado, to the hospital.

As emergency responders came to the scene, it was obvious that for the injured, this wasn’t an ordinary traffic accident. The severity of the injuries sustained by Maldonado required the need for the fastest possible transportation to the hospital. Typically called out for critical situations, a CALSTAR (California Shock Trauma Air Rescue) air ambulance landed at Wilcox and transported Maldonado to Kaiser Permanente Hospital in Santa Clara. Arrested at the scene, Gan would see what few students his age see – the booking room and inside of the City of Santa Clara’s jail.

n Wednesday and Thursday, April 6 and 7, the Every 15 Minutes program came to Wilcox High School in Santa Clara. No one died. No one was injured. The accident was staged through the cooperation of the Santa Clara Police Department (SCPD) and the Santa Clara Unified School District. The real objective was to teach students that the oft-repeated statements decrying drunk driving do have meaning and that actions can lead to unexpected consequences. Going to the party might be a good idea. But hopping into your car to drive anywhere after you’ve been drinking is always the wrong thing to do.

Before the crash scene played out to the assembled student body seated in the bleachers at the football field, 12 students were chosen to act the role of the living dead. These were students who would represent fellow classmates, killed due to a drunk driver. The “victims” of the accident had realistic looking makeup applied so they could better play their roles of the dead, dying or severely injured. At a pre-arranged time, the parents of the students who were chosen to play those killed in the mock-accident, received a very-real visit from the SCPD for a death-notification. Even though it had been pre-arranged, the shock of hearing the news that their children had been killed, caused very real emotions and feelings.

Public Safety Sports
Author Erika TownePosted on April 16, 2019
The Santa Clara District Attorney has decided to move forward with charges against the former head coach and CEO of the Santa Clara Swim...