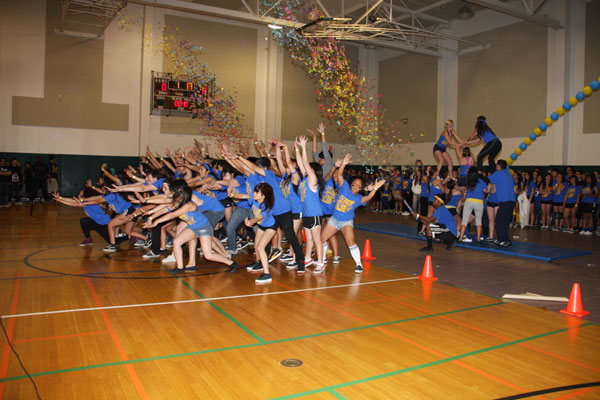 The Santa Clara High School students came in their blue t-shirts and covered one side of the court. The Wilcox High School students came in their black t-shirts and covered the other side. Over 500 high school students from both high schools congregated at the Youth Activity Center on April 8 to watch or participate in the Black & Blue Olympics, an event where students from both schools showed their school spirit by competing in a series of physical challenges.

“Wilcox High School’s colors are black and gold and Santa Clara High School’s are blue and gold,” Casem says. “What both schools have in common is the color gold. So in the Black & Blue Olympics, the schools ‘battled’ for a gold cup. The student leaders and students who participated are the stars and all of them are winners.”

The evening began with a moment of silence for Cpl. Harry Lew, a United States Marine and a 2008 Santa Clara High School graduate, who had recently died in Afghanistan. Next, Melissa Bowling, an alumna of Santa Clara High School, performed the national anthem. Then the competition began rolling as dance teams from both schools flaunted their hottest moves to the other side.

“Seniors, this is the last thing you’re going to do, so make it epic,” jokes Casem as seniors from both schools competed in the grueling tug of war challenge.

Prior to that, freshmen, sophomores, and juniors competed against their same-year peers from the opposing school. Crowds shouted and cheered for their classmates, as the players on the court clung onto their piece of rope. Sometimes students rolled onto the ground like dominoes when the other team yanked away the rope in victory.

Freshmen and sophomores pushed through their relay races. Juniors in the chariot race dragged dormant team members across the court in bed sheets. Seniors in the hula hoop challenge passed a hula hoop among team members sitting in a row.

After intermission, freshmen and sophomores competed in an egg rolling challenge where they used pizza boxes to coax a raw egg into the ring in the middle of the court. A broken egg disqualified a team. A lip sync challenge allowed juniors and seniors to dance and move their mouths to a variety of popular hits, including Justin Bieber’s “Baby,” and Katy Perry’s “Teenage Dream.”

Though the scoreboard showed ties between the two schools at various points of the evening, the final score was 9-8, with Santa Clara High School taking home the coveted gold cup trophy.

Vanessa Hernandez, a senior and class president of Santa Clara High school, points out that the Black & Blue Olympics is intended to be an event to bring students from different schools together in a positive environment.

“It’s important for us to come together with Wilcox,” Hernandez says. “This is a friendly event. I was just talking to [Kenny Gan], the president of Wilcox High School, and he gave me a bandana as a peace offering. The bandana says ‘Wilcox hearts [Santa Clara High School].’ Kenny’s one of my close friends.”

Kenny Gan, a senior and class president of Wilcox High School, also agrees that the Black & Blue Olympics is a recreational opportunity for students from both schools to get together and socialize with one another.

“There is no bad blood between our schools,” Gan says. “This event is a good mixer and it brings two schools together to have some fun before spring break.”

Schools
Author Carolyn SchukPosted on September 5, 2012
Do the subtraction. If neither of the two tax increases on the November ballot – Propositions 30 and 38 – pass, Santa Clara Unified...

Schools
Author Andrew BenschPosted on January 16, 2020
With no seniors and just one win on the season, the Santa Clara Bruins are certainly in a rebuilding situation. However, despite injuries and...