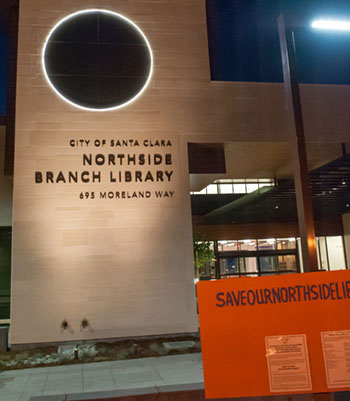 For the last year, the Northside Library has evolved from its humble groundbreaking to the big and sleek new building that is currently 99.9 percent complete. So community members were understandably outraged at the news that Santa Clara County has gotten a temporary restraining order (TRO) from the Sacramento Superior Court blocking funding required to finish construction of the library and other projects.

The library has been in the city’s long-term blueprint since the 1960s. When the Rivermark development began construction in the late 1990s, Rivermark Partners donated three acres to the city specifically for use as a library. And arguably, construction began in 2004 when a parking lot was built that would serve the library and the adjacent park.

Further, the first money for construction, $1.5 million in RDA funds, was appropriated in 2007. Construction was delayed, however, when city deficits limited general fund money available for operating the library. An improvement in city revenues in 2011 allowed the project to go forward. Bogard Construction was hired to build the library and broke ground in July 2012.

“In January 2012, the library foundation received funds from the City of Santa Clara to build the library; we received $18 million all at one time,” Daane says.

“On Feb.1, Santa Clara [Revelopment Agency] was dissolved by order of the governor, along with every RDA in the state. Shortly thereafter, the Santa Clara County RDA Oversight Board was established. On March 23, 2012, then Santa Clara city manager Jennifer Sparacino, and assistant city manager Alan Kurotori presented the project status to the Oversight Board, showing architectural rendering of the building, and sharing that the library foundation would be going out to bid for contractors shortly. The Oversight Board had no response.”

“The order required that the city stop spending bonds, revenues, and other proceeds that were considered to be former Redevelopment Agency assets,” writes Santa Clara Mayor Jamie Matthews in an email. “Unfortunately, one of the effects of complying with the TRO is that it was necessary to request the Santa Clara City Library Foundation and Friends to suspend construction of the nearly-completed Northside Library.”

“All these people are angry at the Oversight Board, but it’s not us,” says Don Gage, Chair of the Santa Clara RDA Successor Oversight Board. “We said it was okay to build the library. The county disagreed with our decision. The county took the successor agency, which is the Santa Clara Council, to court and said we couldn’t do that. The judge of the Superior Court ruled that the county was correct. His order was to freeze the money.”

“The litigation was not filed by the Oversight Board, [which Matthews sits on], but by the [Santa Clara County], the Santa Clara County Office of Education, and Santa Clara Unified School District,” adds Ruth Shikada, economic development officer for the City of Santa Clara.

“If the Northside Library is given to the county, and is open as a county library, every Santa Clara resident and residents of many other municipalities would have to pay $80 a year to use it, which is the county’s current policy,” Daane says. “The Santa Clara City Library allows anyone to use their library regardless of where they live. So [the idea of] the Rivermark and Northside residents paying $80 a year to use their neighborhood library would be ridiculous.

“The best case scenario is that the county recognizes that the $19.2 million is being used for the benefit of the public, that the city is not obligated to repay the $19.2 million, and the community is able to quickly open the new library,” Daane continues. “The worst case scenario is that the beautiful new library remains locked up and unused for years, while all this is being fought out at great expense in the courts.”

The TRO wasn’t a surprise, say Santa Clara officials, given the litigation that’s already been filed by the county against the city about hundreds of millions of assets and cash that the city doesn’t believe was subject to the clawback provisions of the 2011 law (ABx26) that shut down California’s half-century old redevelopment program.

A hearing was scheduled for September, but has been moved to February 2014 because the California Department of Finance hasn’t completed its review of non-housing assets of the former RDAs. The city anticipates filing a cross petition against the county, according to Sana Clara City Attorney Ren Nosky.