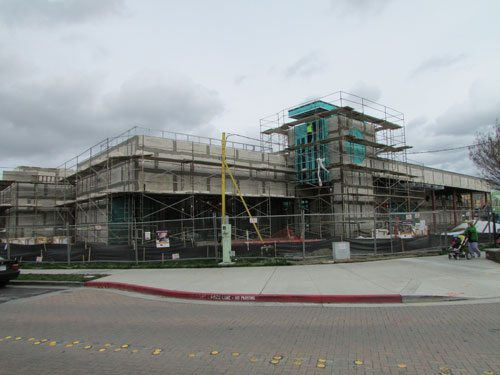 On Wednesday, Santa Clara residents got a first-hand illustration of what’s at stake with the ongoing shutdown of California’s half-century redevelopment program: the possible loss of a much-needed, much-anticipated public library to serve the city’s rapidly-growing Northside.

The project, which has been in the city’s capital improvement plans for many years, was funded with Santa Clara Redevelopment Agency (RDA) funds. Work began on the new branch library in the spring of 2012.

As part of the ongoing litigation surrounding assets and revenues of the now-defunct RDA, last Wed a California superior court judge granted the county’s request for a temporary restraining order (TRO) on continued spending on the almost-complete Northside branch library, leaving it to the parties to negotiate the terms of the written order. Although construction is virtually complete, not spending on operations and maintenance will likely increase costs in the long run, say city officials.

Order applies to prospective spending of RDA assets moving forward, according to Santa Clara City Attorney Ren Nosky. Money already spent is not subject to it. “We’ve stopped any more spending of allocations for construction and operations until resolution of this litigation.” The city anticipates filing a cross petition against the county, says Nosky.

The TRO wasn’t a surprise, say Santa Clara officials, given the litigation that’s already been filed by the county against the city about hundreds of millions of assets and cash that the city doesn’t believe was subject to the clawback provisions of the 2011 law (ABx26) that shut down California’s half-century old redevelopment program.

A hearing on the matter was scheduled for Sept., but has been moved to Feb. 2014 because the California state department of finance hasn’t completed its review of non-housing assets of the former RDAs.

The TRO unleashed a tsunami of public criticism at the Santa Clara Library Foundation and Friends website (www.lovethelibrary.org). An “action rally” is planned for Sunday, Aug. 11 at 11 a.m. at Live Oak Park, adjacent to the new library. And library supporters are marshalling public support for a big showing at the RDA shutdown oversight board’s next meeting on Aug. 16 at 2:00 p.m., with a 1:30 p.m. rally at the City Hall fountain to precede the meeting.

“We are horrified at the county’s attempted action to call a halt to the project,” says Library Foundation Executive Director Maria Daane, noting that the county was informed of the project more than 15 months ago, but chose not to take action until now. “We are expecting a strong turnout at the Aug. 16 rally.”

200 Turn Out to Protest County Halt to Northside Library Completion

City Politics
Author Carolyn SchukPosted on August 29, 2012
RDA Shutdown Goes On..and On At the current pace of operation, it feels like unwinding the state’s RDA program will take as long as...

City Politics
Author Carolyn SchukPosted on May 6, 2020
Sunnyvale Mayor Larry Klein is an unlikely social media star. But in the world of COVID-19 isolation, his low-key, guy-next-door style is just what...
City Politics Community
Author Carolyn SchukPosted on March 9, 2011
In the more than seven decades that she lived in Santa Clara, there were few public questions that Santa Clara community leader Josephine Rowen...
SPONSORED