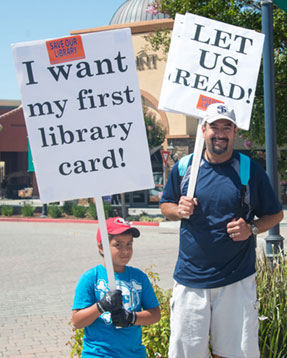 It was a picture-perfect California summer Sunday. But instead of enjoying a lazy afternoon on the beach or a pickup volleyball game in the park, 200 local residents turned out to protest the actions of county officials to halt work on the nearly completed Northside Library.

“The outpouring of support shows how much the community wants a library here,” said Save Our Northside Library organizer and Northside resident Kathy Watanabe.

The county’s restraining order on the city is part of the continuing contest over assets of Santa Clara’s now-defunct redevelopment agency (RDA). Santa Clara’s representative on the county Board of Supervisors, Ken Yeager, did not return calls requesting comment. In a February 2013 letter, Yeager dismissed Santa Clara’s and other cities’ complaints about the RDA unwinding process, saying that RDAs didn’t “represent a fiscally sound and sustainable way” to fund public resources.

“We want the [state] Department of Finance to declare this a public asset and allow us to complete work and get the library open,” said City Manager Julio Fuentes, who said he was attending the event as a private citizen and Santa Claran. “It should remain an asset of the City of Santa Clara. The city shouldn’t have to reimburse taxing authorities because taxpayers have already paid for it. And when it opens it will serve the entire region.

“This is something the community wants, and they’ve worked hard to get this built,” he continued, noting that Santa Clara’s Convention Center and California’s Great America theme park face similar jeopardy.

“You can see the love and support, and it’s sad to see it snatched away at the eleventh hour. This is the kind of project that redevelopment was able to achieve. It’s about taxpayers – not taxing authorities. They’re forgetting who owns these assets. It doesn’t belong to any taxing authority. It belongs to the public, everyone in the county who will use this library.”

One of those library patrons is eighth-grader and Northside resident Aarushi. The 13 year-old visits the Central City library “at least every two weeks.” She says that if she had a library within walking distance, she’d “practically live there.”

“The new library would fill a gap in our community,” she said. “A lot of people don’t have resources at home for research and school work.”

“It’s a sad situation,” said North San Jose City Council Member Kansen Chu, who is a public advocate, as well as a personal financial supporter, of the new library. Chu has been an advocate for the needs of the Santa Clara Unified School District, which serves part of North San Jose. Noting that when North San Jose is built out, this will be a neighborhood library for San Jose as well as Santa Clara, Chu said that imbroglios like this are “a tragedy” for residents.

Claudia Rincon, who lives both in San Jose and Santa Clara Unified, personifies that tragedy. Rincon uses the Santa Clara Central library, but hopes that the Northside library opens soon. “We used to use the Milpitas library, but they started to charge if you’re not a resident. She says the fact that the new library is caught in the larger RDA issue “is a shame.”

Save Our Northside Library is planning a rally at 1:30 on Aug. 16, before the next meeting of the RDA successor agency oversight board at City Hall. Library supporters plan to speak at the meeting. For information, visit saveournorthsidelibrary.com. To see the oversight board’s meeting agenda, visit santaclaraca.gov/index.aspx?page=1419.