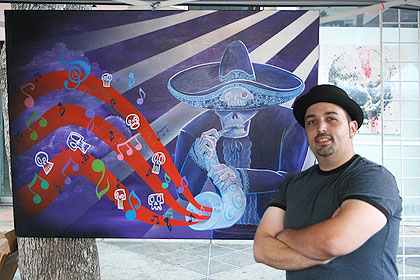 Someday John Cloud would like to paint a mural on the walls of a famous architectural structure, such as the Empire State Building. In the meanwhile, he can be rightfully content with what he has accomplished so far as an artist. From his comic and graphic novels, to his mural at Redwood City’s city hall, to all the portraits people have hired him to paint, Cloud’s work is a testimony to his reputation as a skilled artist in the Bay Area.

A native and resident of Santa Clara, Cloud discusses the ideas that define his art.

“What I love sharing in my art is my heritage- I am Italian, Irish, Native American, and Spanish. So I try to mix all my cultures into my art and share it with other people,” he says.

Crafting lively images of skulls and skeletons is something Cloud is known for. His portrayal of the dead is a nod to his Latin ancestry. According to Cloud, calaveras art, or artwork depicting skulls and lost loved ones, can come with a message of optimism. When creating this style of art, Cloud’s goal is to summon life with death.

“When I painted the mural for the City of Redwood City, I did a Día de los Muertos theme, which means Day of the Dead in Spanish. The whole thing around Day of the Dead is that death isn’t a bad thing, but just a transition between this world and the next,” he says.

Cloud describes the calaveras art he has done on custom-order paintings.

“If someone who died was into dancing or music, I try to depict them doing those things. Sometimes I’d paint a whole family in skeletons, even the members who are still alive, to show that they will be together again someday,” he says.

In his art, Cloud can also show nature from a psychedelic perspective and as an entity capable of human emotions. Last fall, Cloud finished an eye-catching series of paintings depicting a tree trunk with multiple faces. Cloud describes himself as a big nature enthusiast who wishes that people can view the elements of nature as living things.

“I try to put a face to nature and convey the feelings that the earth around us might have feelings that we overlook. [I want my art to inspire others to see] that if we all come together and do our part, the world and earth would be a great place,” he says.

Cloud shares his philosophies about what defines quality art. “A piece of art should bring you joy and happiness to look at. This can be made from someone on the street corner. If something strikes an emotion in you, then it makes it good art,” he says.

Cloud remembers drawing a picture of a clown when he was four years old and getting a positive response from his family for his artistic abilities. His family’s support steered Cloud to pursue an artistic career. Today he holds a degree in graphic illustration from Brooks College in Long Beach and has had his work shown in a number of art galleries in California and in New York. On occasion, Cloud would host open studio events so community members can learn about his art.

From February 1st to March 30th, Cloud’s work will be on display at Bellano Coffee

at 3985 Stevens Creek Blvd. in Santa Clara. On February 18th and March 18th from 6 p.m. to 9 p.m., Cloud will be showing his work and doing live painting at downtown Campbell’s Third Friday Artwalk.

Call (650) 387-4210 or visit cloudconcepts.blogspot.com to learn more about hiring Cloud or purchasing his art.

Run For Your Wife

Arts & Entertainment
Author Cynthia ChengPosted on September 27, 2017
Demons were on the loose at the Sept. 22 opening night of California’s Great America’s 10th Annual Halloween Haunt. Early in the evening, a...