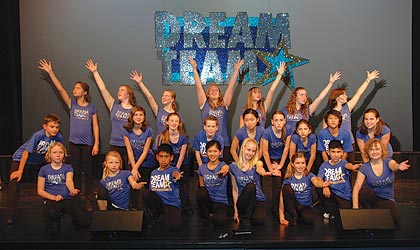 There was just one chance to see it and if you didn’t, then you flat out missed it. It’s gone. Finished. Over. Wednesday, January 25, at Santa Clara High School’s Theatre, Starting Arts held a one-night production of Dream Team. The stated purpose of Dream Team was to “cultivate and encourage the development of wonderful, talented young artists we encounter throughout the Bay Area. This program is for budding triple threats. Participants receive top notch training in music, theater, and dance.”

Over the course of approximately 90 minutes, the cast of the Dream Team put forth 35 different acts in a series of songs, dance numbers, and solo performances that proved Starting Arts is living up to its goals. Perhaps more importantly, Dream Team showed its actors are delivering on the promise.

To say Dream Team featured high energy would easily be an understatement. To say Dream Team was a visual feast for the senses would be far closer to the mark. Between the abundant energy levels displayed on stage and the fact the actors sold their belief in fulfilling their dream would be a better way to describe the excellence of the Dream Team production.

Each individual actor had their memorable moments on stage. Khoi Le, last seen in Starting Arts’ production of Oliver! In 2009 is back again with Starting Arts. Le continues to prove just how good Starting Arts has been for him as his acting skills continue to impress. What seems unbelievable, after watching Le’s performances in six different acts is his age. It’s simply astounding to see a 12-year-old who, according to the “Who’s Who in the Cast,” “has been acting for half of his life,”

But that’s what Starting Arts is all about. Taking young performers and giving them the training and tools they need to truly shine. Nearly every sketch was memorable and right from the moment the lights went down, the action and energy started and didn’t let up until the final curtain call. Two of the longer acts resonated best with the audience as there was more to take in with the entire or most of the cast on stage at once. The opening act, “Can’t Stop the Beat,” from Hairspray and the concluding rendition of “Dream On,” gave the audience a taste of what was to come and then a reminder of just what they had seen. In “Dream On,” Producer Michael Boston had the performers on stage standing in front of and singing while facing mirrors. This added a dimension to the show and helped prove the quality of the actors – singing not to an audience but to their reflection in a mirror.

Dream Team’s cast consisted of eight boys and 27 girls representing 21 different schools from elementary through high school.  For the spring semester, the team will grow to 18 boys and 30 girls. The full 48-member company began rehearsal for West Side Story, which opens on May 26. For more information on Starting Arts, visit their website, www.startingarts.com or call them at (408) 492-9022.

Local Youth Band Hopes To Leave No Members Behind

Arts & Entertainment
Author Melissa McKenziePosted on February 25, 2015
If someone is characterized as “short,” “chipper” or “stubborn,” it will immediately implant an image about the person being described. Although not often contemplated,...