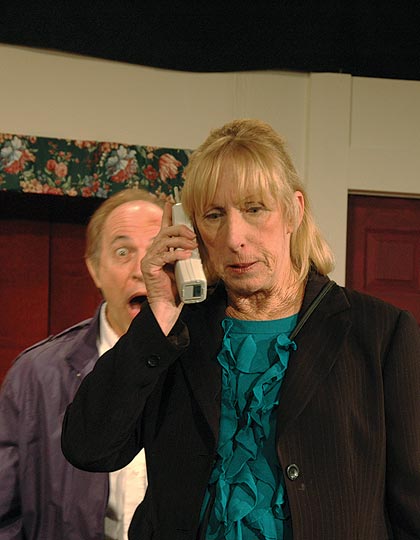 Run For Your Wife, the latest production by the Santa Clara Players, opened on Friday, February 18 at the Triton Museum Hall Pavilion. The description of the show in the program states, “This superb example of the classic farce had them rolling in the aisles in London and New York. A taxi driver gets away with having two wives in different areas of the city because of his irregular working schedule. Complication is piled upon complication as the cabby tries to keep his double life from exploding.” While Santa Clara Players has put on some memorable productions, Run For Your Wife ranks among their best performances.

Run For Your Wife takes place in the living room of the Smith’s flats. The start of the show seems somewhat confusing as the audience is greeted with two main characters, Mary and Barbara Smith, played by Helena Clarkson and Jennifer Parsons, fretting over the extreme tardiness of their respective husbands. Mary and Barbara pace back and forth, attempting to keep themselves occupied to keep their concern over their husbands’ well-being at bay. As Mary and Barbara pass by each other, they don’t seem to be aware of each other’s presence. Just as the audience collectively feels the urge to shout at them to just speak to each other; a bandaged John arrives home, relieving Mary of her concern. As the show progresses, the audience learns that what looked like one flat is really two separate residences – the home of John and Mary Smith and the home John and Barbara Smith. It’s a great “Ah-hah” moment when the audience realizes what’s going on and from there, the zaniness and plot complications come fast with some unexpected and imaginative results.

Matt Matthews plays the clever, extremely well-organized, helpful and quick-thinking, John Smith. Matthews is in a role that seems to have been cast for him as acting ability and seemingly never-ending range of facial expressions helps pull off the wildest of plots – one man, married to two different women living in neighboring towns. Only through his odd work schedule and resourceful scheduling is Smith able to pull off his great feat. Except his helpfulness leads him into some fascinating complications and plot twists thanks to the help of an overly nosy Detective Sergeant Troughton, skillfully played by Marie Ballentine. Matthews is supported by his helpful neighbor Glenn Cody, played by Stanley Gardner, whose improvisations serve to add to the lunacy and make John Smith’s complicated life even more complicated.

There are a lot of opportunities to see Run For Your Wife. If you want to see a show with more than enough complicated answers to plot complications, then put this show on your calendar and get over to the Triton Museum Hall Pavilion. The remaining shows are on February 25, 26, March 3, 4, 5, 10, 11 and 12 at 8pm and February 27 and March 6 at 2:30pm. For more information on the Santa Clara Players, please visit their website: www.scplayers.org.

Arts & Entertainment
Author Diane AndrewsPosted on November 9, 2018
Santa Clara University’s dark comedy The Cripple of Inishmaan, playing at the Louis B. Mayer Theatre through Nov. 10, provokes laughter at the very...

Arts & Entertainment
Author Diane AndrewsPosted on January 6, 2017
Phil Ackerly has a five-year-old Netherlands Dwarf bunny named Buster and a white dove. He has four black magician hats, including a $300 silk...

Arts & Entertainment Community
Author Jacob BournePosted on September 5, 2018
Originally from Vijayawada in Southern India, Venu Devu came to the Bay Area to work as a data engineer. Experiencing the pressures of a...
SPONSORED