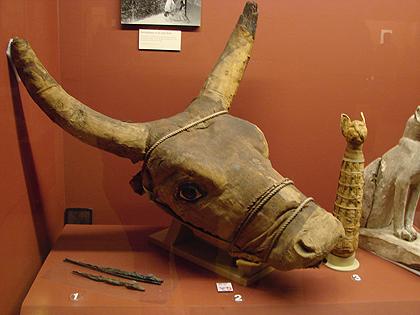 Lying just on the outskirts of Santa Clara surrounded by private homes and a junior high is a curious-looking building with gold doors, painted pillars holding up a hieroglyphic-lined roof, and stone pharaohs standing in front of stone Karnak Rams lining the walkway. It’s enough to make passersby do a double take and wonder just what the building is all about. A small blue sign with white lettering sits just past the building proclaiming the building is the Rosicrucian Egyptian Museum and Planetarium.

After turning down a side street and driving behind the wall surrounding the complex, there is a small parking lot that is free of charge. Then a short walk must be taken through the grounds, past the Peace Garden, the Rosicrucian Grand Temple and fountain, a giant game board where a life-sized game of Senet could be played and finally the walkway leads to the front of the museum.

Once inside visitors are greeted by a docent and asked to pay the admission fee. They can then start exploring the wonders of Ancient Egypt. Most people start in the “Burial Practices, Afterlife and Mummies” room where there are replicas of sarcophagi, Canopic Jars used to hold the vital organs of the deceased, mummified remains of cats, an Apis Bull and finally the Usermontu Mummy peacefully laying in a glass box.

There are two ways to visit the other side of the museum – by walking through the tomb replica or walking across the museum foyer.

The tomb is dark, but meant to give visitors the feel of walking through an actual Egyptian tomb. The walls are filled with hieroglyphics and docents are on hand to “translate” what the scribbles and figures mean.

After emerging from the poorly lit underground, visitors enter the “Daily Life, Trade and Neighbors” room where they are shown artifacts like makeup jars and combs, marriage contracts and a replica of a birthing room where expectant mothers would go to have their children. There is a case with mini Cuneiform (wedge writing) tablets and another with one of four surviving Nebuchadnezzar Cylinders proclaiming Nebuchadnezzar’s restoration of the ancient temple of the sun god in Larsa.

The upstairs part of the museum contains the “Kings and Pharaohs” and “Gods and Religion” rooms with a replica of a Nefertiti bust, etched tablets a step pyramid replica and a preserved Scarab Beetle.

While not organized in the most appealing way possible, the Rosicrucian Egyptian Museum is full of information about the lives and beliefs of the Egyptians. Despite not all of the items being authentic, there are plenty of interesting items to look at and Egyptian history to learn.

There are very few interactive exhibits so small children might get restless, however, a small “passport” kit can be purchased in the museum gift shop containing a booklet and blue light. The blue light uncovers “hidden messages” throughout the museum and the passport can be stamped at various locations throughout. It’s a good way to keep younger, less interested visitors engaged as everyone else reads the information or listens to the audio tour highlighting some of the more storied artifacts.

The entrance fee to the museum itself is a steal at only $9 for general admission, $7 for seniors and students and $5 for children aged 5-10. A $1 discount applies to the general admission price for AAA, AAM, KQED and Military members. An AAA card will also give visitors a free audio tour. There is an onsite planetarium with a single show each Saturday and Sunday. Tickets to the planetarium can be picked up at the admission desk, and entrance to the show is free.

The Rosicrucian Egyptian Museum is located at 1660 Park Avenue in San Jose and open Wednesday-Thursday from 9 a.m. to 5 p.m., Friday from 9 a.m. to 8 p.m., and Saturday and Sunday from 10 a.m. to 6 p.m. The museum is closed New Years Day, Easter Sunday, Independence Day, Thanksgiving, Christmas Eve, Christmas and New Years Eve. The planetarium show is on Saturday and Sunday at 3:30 p.m.

Arts & Entertainment
Author Diane AndrewsPosted on May 11, 2011
You still have time to smell the roses. Even if you missed the 2011 Santa Clara Spring Garden tour May 7, you can drop...

Arts & Entertainment
Author Melissa McKenziePosted on May 15, 2013
Everyone is a suspect and no one is safe in Agatha Christie’s classic whodunit tale, The Mousetrap, which the Wilcox Stage Company brought to...

Arts & Entertainment
Author Cynthia ChengPosted on May 23, 2018
At the May 15 dress rehearsal for a show in the City of Santa Clara’s Parks and Recreation Department’s Spring Dance Recital, young dancers...
SPONSORED