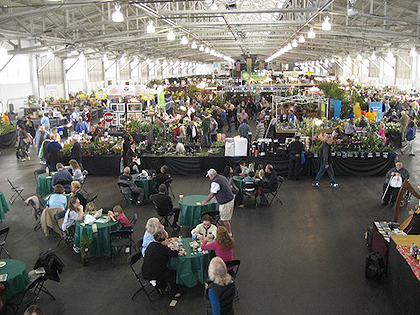 The 59th Pacific Orchid Exposition, the largest orchid show in the country, was held in San Francisco March 3 to 6. More than 150,000 orchids literally from all over the world filled the festival pavilion at Fort Mason Center overlooking San Francisco Bay. The exposition is sponsored annually by the San Francisco Orchid Society.

Orchids were flown in from Malaysia, Japan, Ecuador. They were trucked in from a greenhouse in freezing Missoula, Montana. They were sent by Federal Express from Hawaii. A gala benefit preview with music and wine tasting launched the four-day show, giving serious shoppers the first pick of the orchids and even tips on pairing wine and orchids.

“I always take a couple vacation days off from work to attend. The gala was wonderful. I connect with orchid friends and talk about new orchid stuff,” says Tanya Lam, a San Jose member of the Santa Clara Valley Orchid Society. “And I always go over my budget for orchids.”

“This is a smart exhibit. It shows how anybody can grow orchids in your home. You don’t need a greenhouse. It’s all about light,” says De Salvo, adding, “I have three kids, so I really enjoy my orchids.” The orchid doctors on hand to give advice recommend indirect light for orchids, whether indoors or outdoors.

The Orchidaceae family may be the largest family of flowering plants in the plant kingdom with over 800 genera, thousands of species, and thousands more hybrids and cultivars. (Exact estimates vary.) Orchids are native to every continent but Antarctica and every state in the U.S, including Alaska and especially Hawaii.

“So much of the world’s habitat for orchids has been lost to deforestation. It’s absolutely tragic,” she says. “If you want to help, go see orchids in the wild and help make it financially viable for people to save land. Costa Rica is a great example of how ecotourism can help save the environment. Local people are trained to be rangers, guides, etc.”

Howie Pham from San Jose recalls growing up in Vietnam. “When I was a teenager, we picked orchids from the jungle and took them home and planted them,” Pham says. “But nowadays, they build houses and the jungle is smaller. You see less and less jungle and naturally growing orchids.”

“I used to be a Pan Am flight attendant, and we went to Singapore. We’d go to the flower lady at the market and bring home wonderful orchids in a long box. They lasted forever,” recalls Ruth Horn from Fairfax.

“The color spectrum for orchids is very vivid with rich hues. And the shapes are fragile,” says Franck Avril, a photographer displaying orchid notecards and photos (www.everydayjourney.net).

“Some are real personalities,” he says. His photo of a Paphiopedilum pinocchio shows an orchid lip that looks like a long nose. An exhibit by the Pleurothallid Alliance of the Bay Area displayed black, threatening Dracula orchids named Raven, Edgar.

“You know, this show is not like Trader Joe’s where they just have three varieties,” says Avril in understatement. If you missed the profusion of orchids at the 59th Pacific Orchid Exposition, there’s always next year—February 24 to 27, 2012.

Author of "The Year of Fog" Gives Book Talk