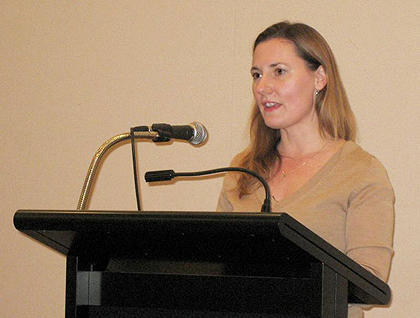 Abby Mason is with her fiancé’s six year-old daughter at San Francisco’s Ocean Beach when Abby looks away for a moment and the girl disappears. This is the beginning of Michelle Richmond’s critically-acclaimed novel, “The Year of Fog.” Richmond gave an enlightening book talk at Santa Clara’s Central Park Library on March 8 to discuss her writing process and the effort it took to get the book published.

“The Year of Fog” is a page-turner about family, loss, hope, and choices. Audience members at the book talk commented on being hooked into the story from the instant cliffhanger at the beginning of the novel.

“I wanted to write a book where the big event happened in the beginning, the moment where six year-old Emma goes missing on Ocean Beach,” Richmond says. “When this terrible thing happens to Abby and Jake, her fiancé, how will their relationship survive?”

A resident of the Bay Area, Richmond says her love for the city of San Francisco inspired the setting for her story.

“[When I visited San Francisco as a child], I stayed at a motel in the Tenderloin because my mother was always up for a bargain,” she says. “I remember being in San Francisco and thinking how I wanted to live there someday. When my character Abby comes to San Francisco with her family as a 13 year-old, she and her family go to the wharf and take a ferry, like I did.”

In the story, Abby reaches into her own memories of childhood to make sense of what had happened to her fiancé’s daughter. To write “The Year of Fog,” Richmond did a lot of research about memory, a prevalent subject in the novel.

“I don’t know a lot about memory except that I forget everything,” she says. “So I read a book about memory called ‘The Art of Memory.’ What’s fascinating are the case studies that made its way into this book. For example, there’s Shereshevskii, the man who could not forget anything.”

It took Richmond four years to write “The Year of Fog.” After writing the novel, Richmond struggled to find an interested editor.

“When I got an agent, many [editors] rejected my story,” she says. “No one wanted to publish it- they thought it was too depressing. Then a young editor at Bantam took it. The original title was ‘Ocean Beach,’ but my editor said it was too redundant. So we decided on ‘The Year of Fog.’ Abby was living in a fog while looking for the lost child.”

Richmond’s patience and hard work paid off. After “The Year of Fog” was published, it became a New York Times bestseller, a Kirkus Reviews Top Pick for Reading Groups, and the featured book of this year’s Silicon Valley Reads. Richmond has been making many appearances in libraries, book stores, and community centers across Silicon Valley to promote her book.

Arts & Entertainment
Author Larry SacksPosted on November 4, 2015
With Halloween this Saturday, October 31, time is running out to face your fears at Great America’s Halloween Haunt. If you’re in the least...

Arts & Entertainment
Author Carolyn SchukPosted on February 28, 2018
This weekend the curtain will rise on Santa Clara Showtime and it will be time to pay another visit to Doomstown—Santa Clara’s parallel universe,...

Arts & Entertainment
Author Diane AndrewsPosted on September 24, 2019September 30, 2019
The Sikh Foundation International and Ik Onkar Bridges are excited to partner with the Triton Museum of Art in Santa Clara in presenting Expressions of...
SPONSORED