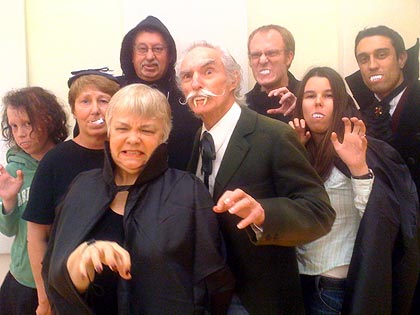 It’s getting to be that time of year again. Show Time, that is. For the 29th year in a row, sponsored by the Santa Clara Women’ League, Showtime’s intrepid players will take to the Santa Clara Recreation Center stage to benefit senior health services.

As always, the action takes place in Showtime’s perennial geography, Doomstown – a community under perpetual siege from a variety of malefactors covering the criminal spectrum from arson to white slavery. After a narrow escape from pirates last year, 2011 finds Doomstown’s residents plagued by vampires.

The show opens at the Santa Clara library. While perusing old newspapers, librarians Elaine Carmelite (Elaine Lewis) and Dorothy Warburton (City Library’s Hillary Brookshire on a busman’s holiday) faint in the airless archives, waking up in 1852 Doomstown just in time for an election.

But the ingenuity of lawman duo Sheriff Sam (Rick Mauck) and Deputy Dan (Peter Sparaco) is – as always – more than a match for the malefactors. Aided by garlic horticulturists, the Greenjeans Sisters (Arlene Rose and Linda Sutton), the lawmen soon send the fiendish felons packing. The time-traveling librarians soon find themselves back in twenty-first century Santa Clara. And all’s well – until, of course, next year.

In between, the long-suffering citizens of Doomstown offer up plenty of comedy – not to mention corny vampire jokes and a Showtime take on Michael Jackson’s music video, Thriller.

The show also features a cameo of Showtime’s sole four-legged performer, Zoey the dog. This is the amiable St. Bernard’s third appearance with Showtime.

Showtime got its start in 1982 when longtime community activist and journalist, Cleo Stuckrath decided to put on a benefit to replace senior health funding cut as a result of Proposition 13, California’s three-decade-old property tax cap. Showtime has raised more than $250,000 for Senior Center nursing services.

Showtime is March 4-5, 2011 at 7 p.m. and March 6, 2011 at 2 p.m. All performances are at the Santa Clara Community Recreation Center, 969 Kiely Blvd. Santa Clara. Tickets are available at the door, and in advance from the Santa Clara Senior Center, 1303 Fremont Street, Santa Clara. For more information, visit www.santaclarashowtime.net or call 408-615-3170.

Arts & Entertainment
Author Melissa McKenziePosted on November 14, 2012
What looks like slabs of paint to some is poetic and beautiful for others. Not everyone understands or cares to see the complexity of...