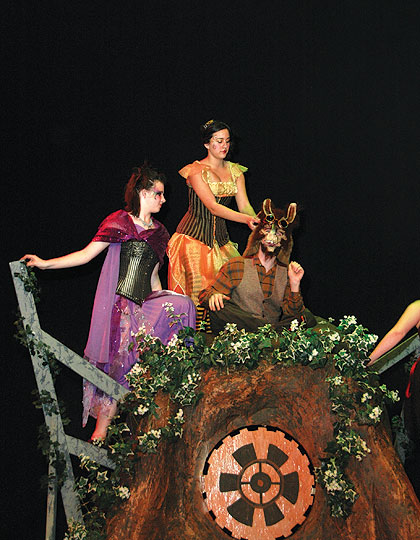 Wilcox Stage Company is back, and this time they’re taking on a writer no less notable than William Shakespeare. This time, the production is A Midsummer Night’s Dream and, as with other productions by the Wilcox Stage Company, this is something you should put onto your schedule as a must-see performance. Kim Saunders not only directed the production, she also adapted the script into a genre known as “Steampunk.” According to the Saunders’ Director’s Notes, Steampunk embodies a Victorian-era alternate world where steam provides the power to a fantastical society.

“Here one is as likely to travel by dirigibles as by train, boat, or even submarine. In this world, space exploration lingers on the horizon and civilizations that were once lost are found and then lost again. In this environment of endless possibilities, artisans, fairies and members of the court of Theseus cluster together and split apart as smoothly as the fantastical machines of this mystical era.”

Even if the idea of seeing Shakespeare’s original work, written in 1595, done in Steampunk gives you pause, don’t let it keep you from seeing this show. All the familiar characters are there – Wisteria, Hippolyta, Lysander, Puck, Mustardseed, Theseus, Oberon and the fairies. It’s just that their costumes and accessories are somewhat different than they were when Mr. Shakespeare first penned this well known comedy. Puck, for instance, rides around on a Razor scooter. Oberon’s makeup and costume is a bit more flamboyant than you might see in a conventional production.

What Saunders has done in the past with productions such as 2008’s hit, “Noises Off” and 2007’s “Mouse Trap,” surpasses audience expectations. Except now the actors are more seasoned. It’s easy to assume she pushes her actors to work harder with each production and, while Noises Off was better than Mouse Trap, A Midsummer Night’s Dream is even better. The technical aspects of the show and acting are all first rate. If anything, you might find yourself wishing the play didn’t come to a conclusion quite so quickly.

The only caveat is if you’re not a fan of Shakespeare, you might find yourself wondering what is going on and why on earth are the actors speaking in olde English. But even then, just tell yourself, in 1595, people did talketh this-ith way and sit-ist thyself back and prepareth thy-self for a wonderous show.

A Midsummer Night’s Dream opened on January 27 and, unfortunately, as with other Wilcox Stage Company productions, has a short run. Shows were presented at the Mission City Center for the Performing Arts.

Run For Your Wife

Arts & Entertainment
Author Melissa McKenziePosted on July 1, 2015
With an expanded entertainment element, the Triton Museum of Art held its annual summer art fair on June 20. Changing its name from the...

Arts & Entertainment
Author Cynthia ChengPosted on August 10, 2016
In its summer production of “Shrek the Musical Jr.”, the Roberta Jones Junior Theatre showed that beauty comes from within. At the ripe old...
SPONSORED