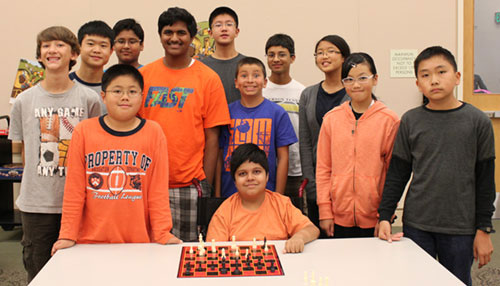 The library is more than just a place to check out books. One of the many summer programs the library offers young people includes the Teen Chess Club, meeting on Monday afternoons at 3 p.m. through July 15th at the Central Park Library.

“One of the Teen Library Council members is Hershel Shah; with the help of his brother and his friend, he wanted to lead a series of chess workshops,” says Nan Choi, the teen services librarian at the Santa Clara City Library. “Hershel came up with a lesson plan for each meeting. Last week, they worked on end games and middle games. This week, they’re working on tactics and strategies. On the first week, they reviewed rules and movement of pieces.”

Shah, an incoming junior at Wilcox High School, has won over 20 chess trophies. He is enthusiastic about sharing his knowledge.

“In the past, I’ve played in competitive tournaments in California,” Shah says. “I want others to know that chess has educational advantages. It helps with math, it helps you recognize patterns, and it’s fun.”

Tommy Giang, also an incoming junior at Wilcox High School, is working together with Shah to run this chess club.

Both Shah and Giang agree that the club also fosters new friendships. According to Choi, the kids who have been attending the club meetings on a drop-in basis have experience levels ranging from being complete novices to experienced chess players. The experienced players are expected to help out new learners.

Arts & Entertainment Community
Author Carolyn SchukPosted on December 6, 2022December 5, 2022
My first introduction to Santa Clara First Baptist Church’s “Bethlehem” was the remarkable sight of a camel grazing on Benton Street. That was 18...

Community
Author Press ReleasePosted on December 2, 2022
As the community prepares to celebrate the season of giving, Home Instead® encourages residents of Cupertino up to Belmont to share the holiday spirit...
SPONSORED