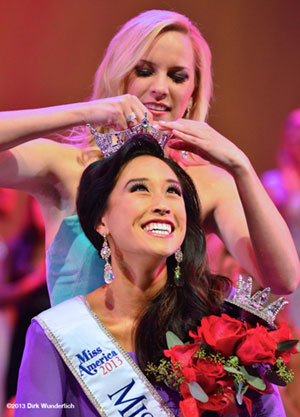 The eloquent and talented Crystal Lee has competed in the Miss California pageant three times. The third time was a charm for Lee. When she competed at the state pageant in Fresno at the end of June as Miss Silicon Valley 2013, performing a graceful ballet en pointe to “The Swan” as her talent, she was crowned the plum title of Miss California 2013 and awarded $14,925 in scholarship money.

When Lee was announced as Miss California 2013, various emotions filled her.

“It’s one of those moments in life where you’d dream about it, but you never know how it’s going to be like until it actually happens,” Lee says. “I felt fulfilled. I felt humility. I felt grateful and excited. I was in total shock.”

A San Francisco native, Lee will have a busy year ahead of her. She will be preparing to compete in the Miss America pageant in September. On top of that, she will promote her platform of mentoring young women and make scheduled appearances at a number of locations, including news stations, veterans homes, and children’s hospitals.

“I’m loving the job of Miss California so much,” Lee says. “In the future, I’ll be interested in working in Silicon Valley, perhaps be an entrepreneur or work at a start-up.”

Lee graduated in June from Stanford University with a B.A. in Human Biology and an M.A. in Communications.

“After I graduated, I packed up my dorm room, went straight to Fresno, and now I’m living out of hotel rooms; my home base will be in Fullerton, California,” Lee says. “But I’ll still be coming up here for appearances.”

In January, Lee won the title of Miss Silicon Valley 2013 in a pageant hosted by the Miss Santa Clara Auxiliary. Lee’s homecoming as Miss California 2013 will be at Fiorillo’s Restaurant in Santa Clara on Sunday, August 4th at 1 p.m. Admission is $30 per person. Email mary.mccaman@gmail.com for more information.

Antiques Show Leaves Some in Awe