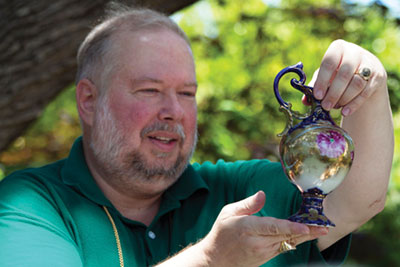 There were many treasures on display at the 10th annual Harris-Lass Antiques Show and Tell Luncheon on July 10.

Each year, the museum holds the event, allowing those who buy tickets to bring in an item and have it appraised by antiques dealers and those knowledgeable about antiquing. This year, the museum welcomed Steve Yvaska, a teacher and writer for the San Jose Mercury News, Craig Trimball of Antiques Colony on San Carlos in San Jose, and Gracie Garcia of Gilroy Antiques on Monterey Avenue.

After guests dined on box lunches, the show began. While most items were appraised at values under $100, the most shocked person in the audience was former city employee Robin Burdick, whose chair was a real gem.

“One of the gals brought in a beautiful Hitchcock chair,” said Trimball. “These chairs were done in the late 1800s and I just looked it up online. So just looking it up on ebay, not even checking different sites of this, they start at about $300 a piece and go up to $1200…After saying that, I’m going to go back and say that the condition on this one is a little bit rough. It needs some cleaning up and there’s a loss to the paint. I think this chair got a lot of use because the back rail would have been painted with guilding and gold paint also. So, a lot of that is gone. It will impact the value a little bit but it’s a great piece of American antiques.” 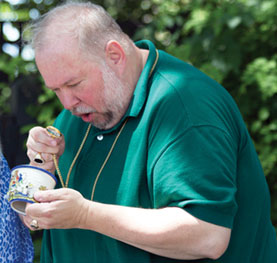 Burdick was absolutely floored by the appraisal. “[My boyfriend and I] went to the DeYoung Museum on Sunday for his birthday and there was a chair in the exhibit,” she said. “He said, ‘my dad gave me a couple of those to store when he went off to Arizona’ and then he said, ‘I don’t know if they’re real or not.’ So, I said, ‘hey I’m going off to this thing why don’t I take one’ and it’s like oh my God it’s real…It’s unbelievable.”

Another interesting story was that of Peg Horrillo. Years ago, Horrillo bought a transfer platter from Yvaska for $45. She brought the platter for reappraisal on Wednesday.

“Steve sold [the platter] to me years ago, but he doesn’t remember that he sold it to me” said Horrillo. “I’m going to see what he values it and then I’m going to say, ‘yes, it was a good deal,’ or ‘no, because you sold this to me years ago for x amount of dollars’…That’s why I brought it.”

The pressure was unknowingly on when Yvaska did her appraisal. “This small meat platter probably dates from around 1830ish or so and it’s in pretty good shape for something that old…But it sure is pretty and the pattern is clear…There’s a woman who specializes in this in the area. If it were in her shop she’d probably have it for $100, $125, $150, maybe even a little bit more.” Horrillo was pleased. It looks like she got a pretty good deal after all.

The Harris-Lass Museum House is at 1889 Market St. in Santa Clara. Visit www.harrislass.org for more information.

Community
Author Diane AndrewsPosted on December 12, 2019
Bob Buchser makes a big hit when he puts on his custom-made Santa Claus suit and arrives in a Lexus convertible at the Rotary...

Community
Author Melissa McKenziePosted on July 31, 2013
Bernard Smith is a typical 27-year-old. He loves music, is taking college classes, has an interest in computers and biology, and enjoys spending time...

Community
Author Cynthia ChengPosted on November 22, 2017
On the afternoon of Nov. 10, workers were busy scraping the logo of the Yan Can Asian Bistro from doors at the restaurant’s location...
SPONSORED