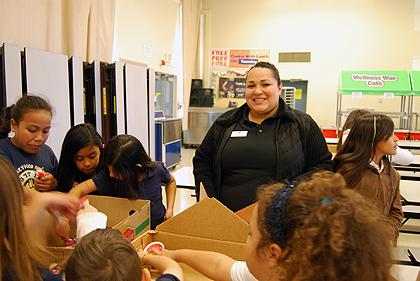 Elisa Perez is an afterschool site director at Scott Lane Elementary School through YMCA of Silicon Valley. One day a boy came to her complaining of a stomachache.

“I spoke to the boy and found out that he wouldn’t get to eat until Friday when his mother got paid,” Perez says. “And it was Tuesday. All he had been eating then were the free school lunches.”

So Perez contacted her colleague, Valarie Ikemoto, the afterschool youth and family senior program director at YMCA of Silicon Valley, and advocated for the students in her afterschool program who weren’t getting adequate food at home.

“I called Second Harvest Food Bank, and they told me about the Kids NOW program, also known as Kids Nutrition on Weekends,” Ikemoto says. “We started something where every Friday, Second Harvest would deliver food to Scott Lane and we’d have the kids in the afterschool program grocery shop through the line [for free]. We call it healthy grocery shopping. The kids get rice, peanut butter, fresh fruit and vegetables, crackers, and granola bars.”

“On Fridays, the students get excited because they know there’s going to be food,” Perez says. “One student tells his mother with a spark in his eye that he would bring her food. The students and families say thank you so much or muchos gracias.”

“Nationally, about one out of six people is hungry,” says Mary Hoshiko Haughey, vice president of program and community development at YMCA of Silicon Valley. “Stunningly enough, it’s estimated that one out of four people is hungry here in Silicon Valley-that’s estimated by Second Harvest Food Bank. In Silicon Valley, 40,000 of the hungry are children. [So helping to feed our children] is the right thing to do. Second Harvest is an outstanding partner for making this a reality.”

Perez’s advocacy for the children she worked with helped win her the National Afterschool Association’s 2011 Quest for Excellence Award. In addition to maintaining the grocery shopping program at Scott Lane Elementary School, Perez also oversees other activities for the kids as well.

“We have Los Dichos, meaning ‘proverbs’ in Spanish- this is a reading program where fifth graders can read books to second graders in the same afterschool program,” Perez says. “We also do community campaigns. We raise funds for youth who can’t afford [certain things]. To raise money, we do coin drives, car washes, and sometimes kids ask their parents to contribute.”

The boy who had initially approached Perez with a stomachache is still in her afterschool program.

“[Since we started hosting the grocery shopping program], he’s become more focused and he does his homework,” Perez says. “He’s more of a leader now. For example, if he sees someone who is struggling or needs help, he’d ask them if they need help.”

Visit www.shfb.org to learn more about Second Harvest Food Bank or to make a donation.

The Mystery of Edwin Drood