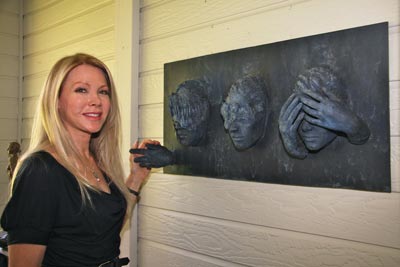 Kristin Lindseth-Rivera knew she wanted to be a professional artist ever since she was a child. So she worked on her craft and studied art in many schools, including the University of Paris. Eventually, she made her childhood dream come true. Today Lindseth-Rivera is an established artist known for her mesmerizing sculptures, prints, and drawings. She is also an art instructor at Mission College.

“The concept of my art is about expressing emotion and the human experience,” Lindseth-Rivera says.

“I have been using the human figure to express the whole of the human experience-our trials, our joys, our isolation, and our interconnectedness,” Lindseth-Rivera says. “I use nude figures to get to the essence of humanity. Our society is obsessed with the façade of an image. I really try to get under that and talk about what’s really important in our lives, such as our need to grow as human beings.”

Lindseth-Rivera discusses two of her sculptures.

“In ‘Bound Figure,’ the binding is metaphorical,” Lindseth-Rivera says of her sculpture showing a nude figure tangled in rope. “The ropes are not real ropes, but a metaphor for a condition in life. And this particular figure could easily escape the binding if she knew she could. I want to show in this piece how we sometimes create our own boundaries and chains.”

“In ‘Blind to Reality,’ I want to show how we’re often blinded to others’ reality, by others’ beliefs, cultures, or experiences,” Lindseth-Rivera says of her sculpture depicting three faces with covered eyes. “Sometimes I feel like people live in different worlds from each other. That’s what this piece is about, being open to others, so we don’t isolate ourselves. Being married to someone of Japanese and Mexican ancestry, I’ve always been interested in different cultures and learning about what I don’t know about.”

Lindseth-Rivera’s personal experiences and curiosities about the world around her have shaped the messages she conveys in her art.

“My pieces are based on my individual journey but they relate to the experiences of men and women of all cultures,” she says.

Lindseth-Rivera has exhibited her art in many museums, including the Triton Museum of Art in Santa Clara. She has also won a number of awards, such as an Award of Merit from the City of Santa Clara for a juried sculpture exhibit in 2008. Nonetheless, Lindseth-Rivera remains humble about her achievements.

“Success isn’t about making sales,” Lindseth-Rivera says. “There was no break-defining moment for me in my career as an artist. Creating art requires a long and steady journey of trying to grow and convey your personal ideas.”

From July 28 to September 15, Lindseth-Rivera will exhibit her sculptures in “Crossing Boundaries,” a two-artist exhibition also featuring painter Ming Jing (Mike) Wang at The Art Museum of Los Gatos. Members of the museum can meet Lindseth-Rivera and Wang on Sunday, July 31st at 4 p.m. during a Meet the Artists reception.

Visit museumsoflosgatos.org for more information about the “Crossing Boundaries” exhibit at The Art Museum of Los Gatos.